Video: Watch this Komatsu tackle ‘wagon’ silage in the midlands 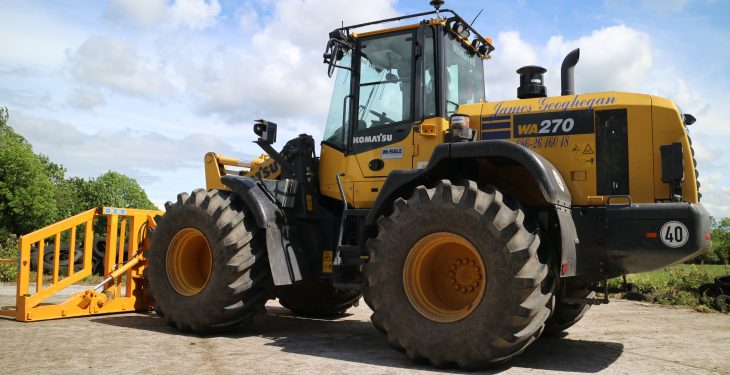 Contractor James Geoghegan took delivery of a Komatsu WA270 loading shovel in late 2016, primarily for silage work but for other tasks too. Several months on, how is the machine faring?

Geoghegan is based close to Tyrrellspass, Co. Westmeath. He undertakes a range of contracting activities, including slurry work, reseeding, fencing, plant hire and ‘wagon’ silage harvesting.

He embarked on this business back in 1990 at the daunting age of 18. Since then, he has built up the business by providing a “reliable and efficient service” to his growing customer base.

To keep up with growing demand, and ever-reducing working windows for some jobs, Geoghegan decided to replace his loading shovel – a JCB Farm Master 416 – with something newer and bigger last year. He opted for a Komatsu WA270-7, along with a 14ft-wide OCE folding fork. 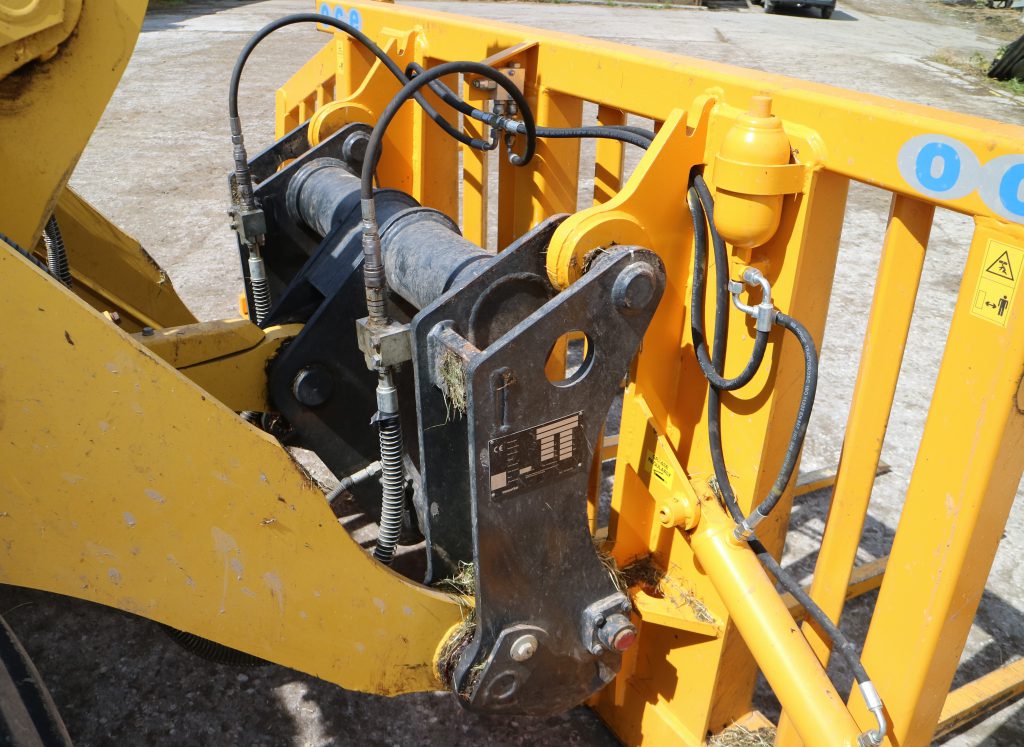 He explained: “I went for a Komatsu as I had seen them being worked by other contractors; I liked the build quality and operator comfort. I spoke to people who had run different makes; I ultimately decided on Komatsu based on word-of-mouth reports – about reliability and efficiency.”

Komatsu loading shovels are not typically the ‘default’ choice for agricultural contractors here in Ireland; brands such as JCB and Volvo have larger followings. However, Komatsu is growing its base of agricultural customers – apparently building its market share year-on-year. 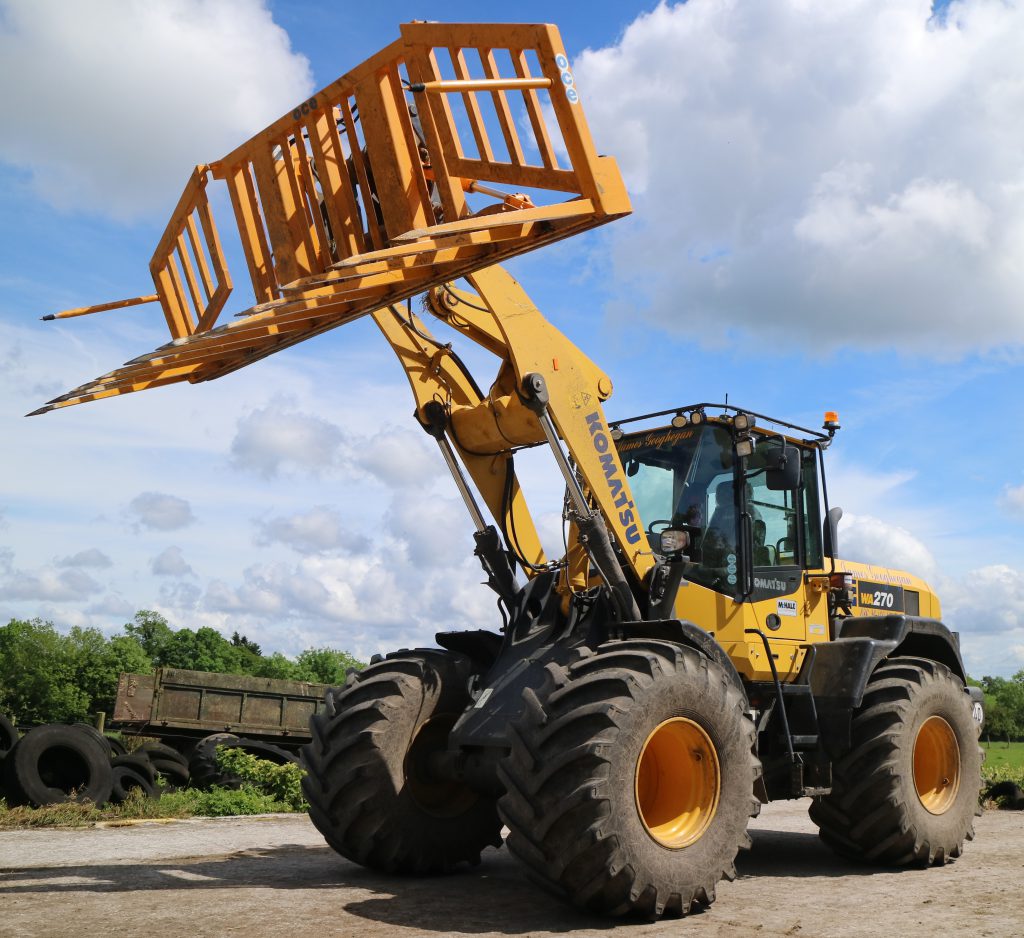 The WA270-7, which replaces the WA250-6, was released in May of last year. While a ‘baby brother’ to the more recognisable WA320, the WA270 is proving a very able performer. That’s the message from Paul Mullally, wheeled loader specialist with McHale Plant Sales – the Komatsu distributor. 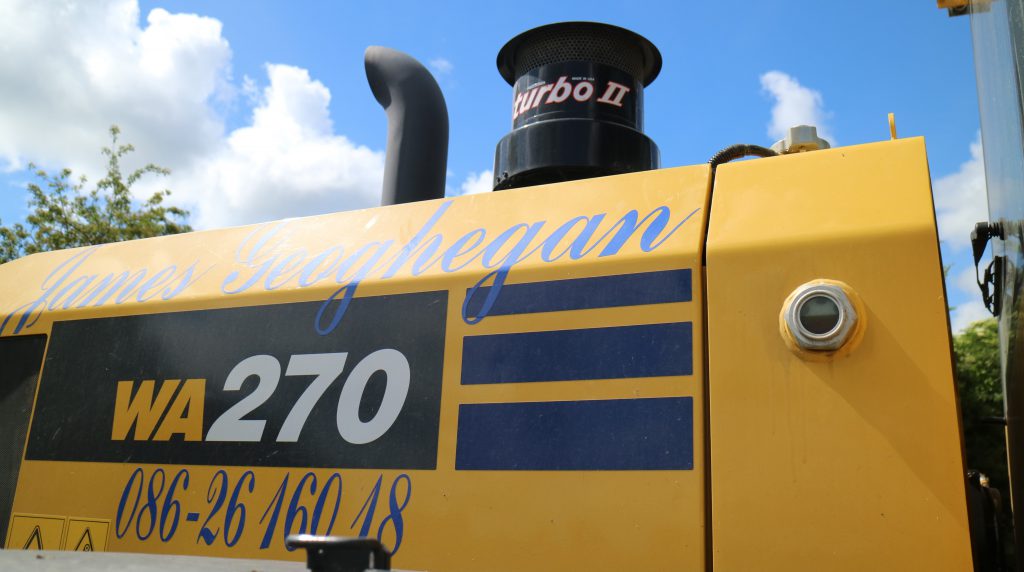 He explained: “We have already sold four WA270-7s. It’s a jack-of-all-trades and it really is an extremely versatile machine.”

So let’s take a closer look; what makes this machine tick?

Underneath the rear wings lurks Komatsu’s own 6-cylinder, 6.7L engine. This motor churns out 149hp at 2,000rpm. A variable-geometry turbocharger is fitted, which is controlled via a hydraulic actuator. 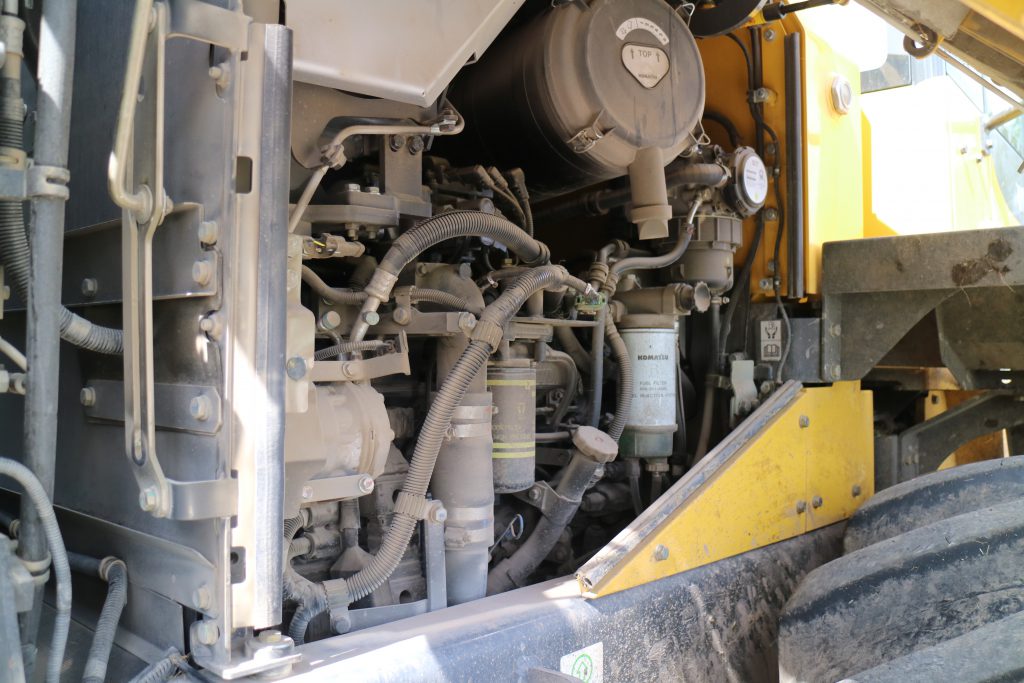 The engine also incorporates a diesel particulate filter, which captures 90% of particulate matter (PM); it is automatically regenerated without necessarily interfering with daily operation. Also added into the mix is a cooled exhaust gas recirculation (EGR) system.

The hydrostatic transmission can propel the chunky machine to a top speed of 38kph. An especially-handy feature is the auto-shifting function. It, says Komatsu, eliminates the need for any driver-instigated gear-shifts and kick-downs – allowing him (or her) to concentrate on the job at hand. The transmission also doubles up as a ‘dynamic brake‘ to slow the loader when needed, which should help to prolong the life of the wet-disc braking system.

This particular WA270 is fitted with 710mm-wide tyres – which is typical of the ‘Irish’ specification. 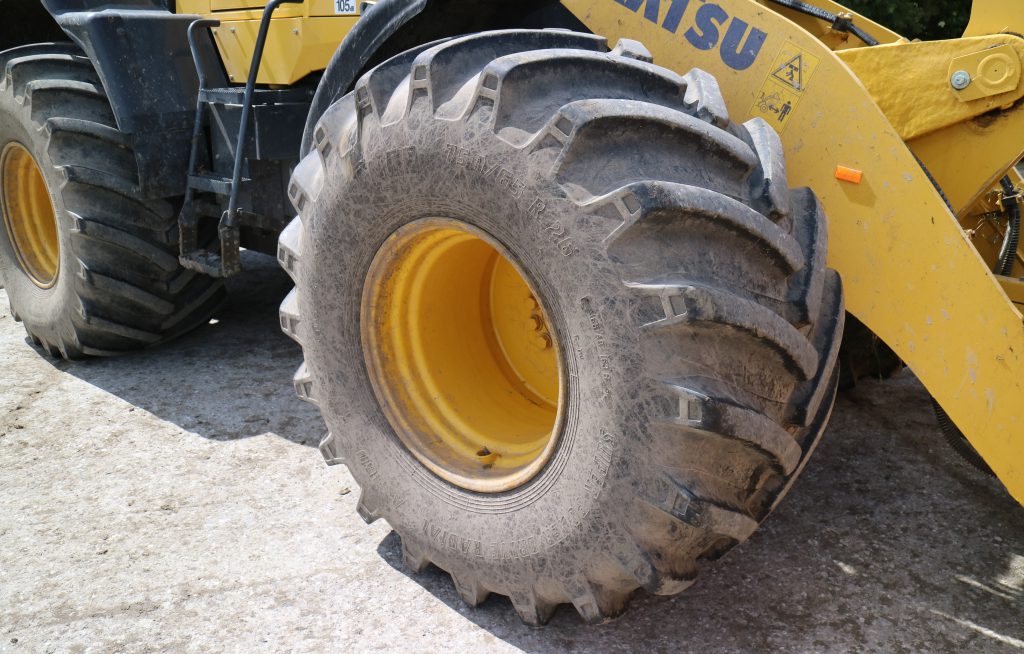 Scaling the steps brings you up into the newly-revamped operator’s cab; it provides a quieter environment than before. Komatsu claims that visibility has also been improved. The multi-function ‘mono lever‘ fits nicely in the hand; it incorporates a forward / neutral / reverse switch, ‘maximum traction’ button and a third (spool) valve controller. 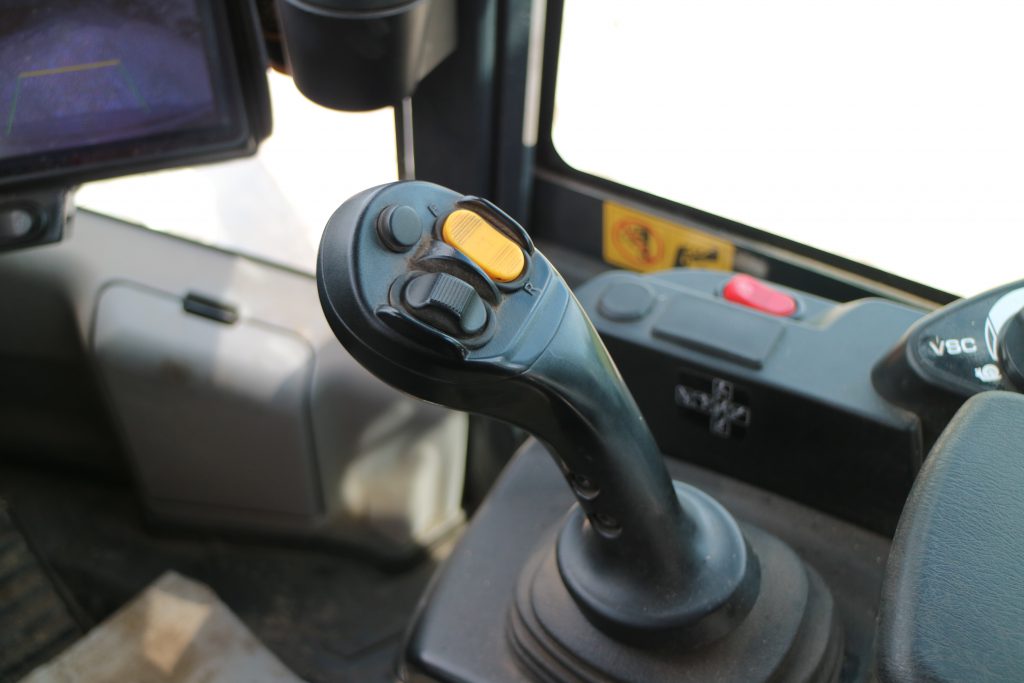 To keep you abreast of what’s happening, Komatsu fits a 7in LCD monitor, alongside the newly-designed dash. A rear-view monitoring system comes as standard. 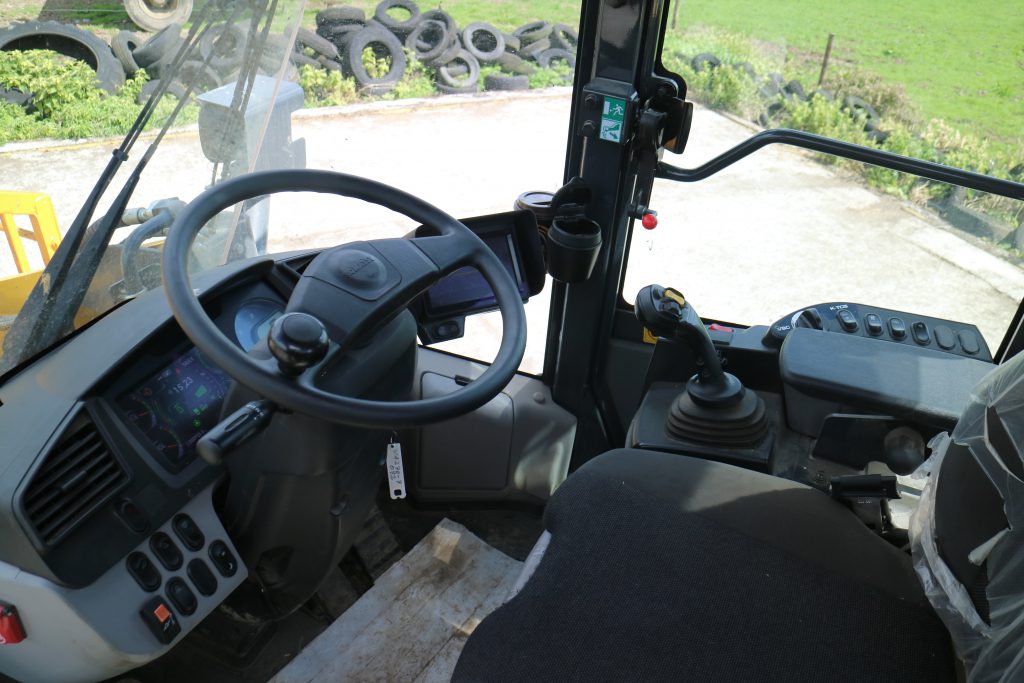 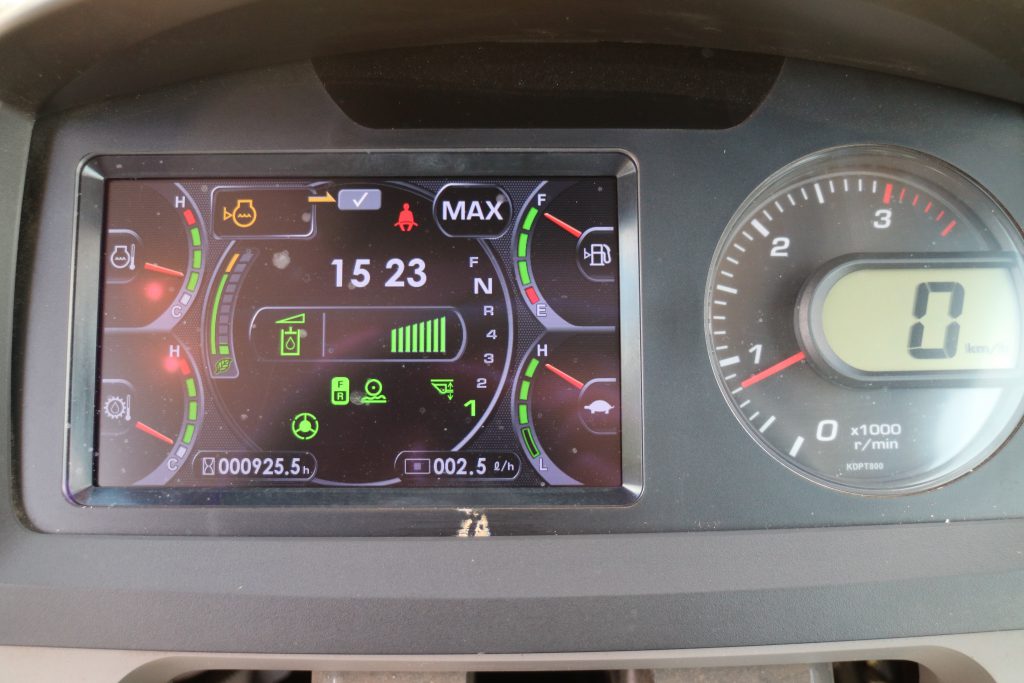 Up front, at the business end, breakout force has increased over the previous model – allowing for more grunt whether pushing up silage or loading dung. For added convenience, the loader now features ‘auto roll-back‘, which tilts the fork or bucket back as the arms are raised – to help reduce spillage. 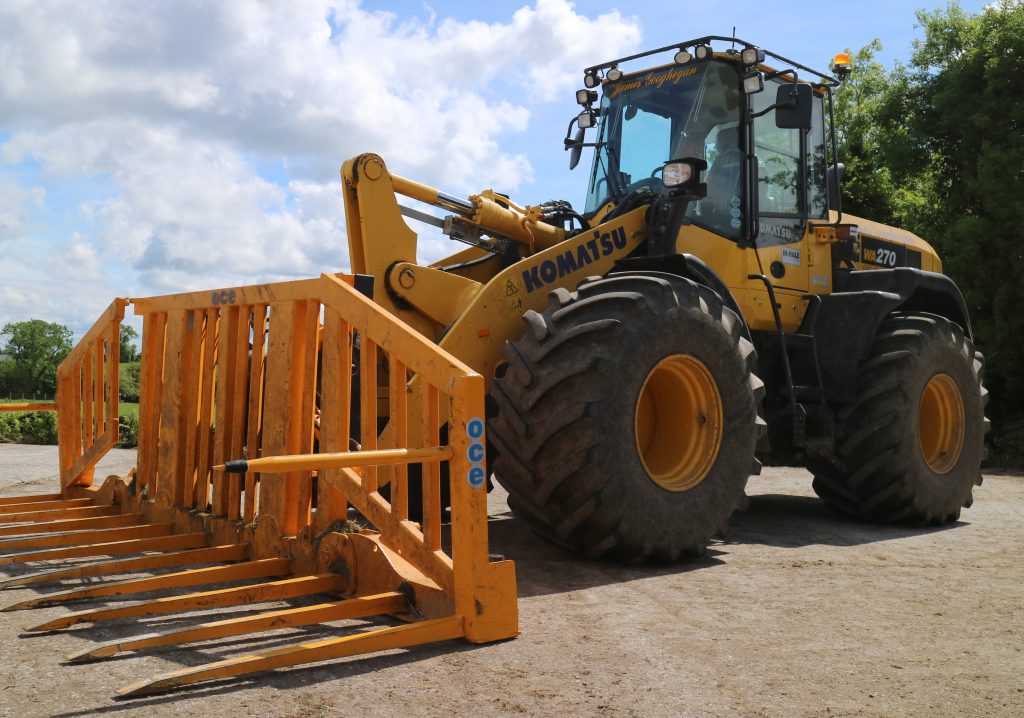 Service access on the WA270 is reasonably easy, thanks to the large ‘gull-wing’ engine doors. They are kept aloft by gas springs, allowing the operator to reach the key service points. Round the back, the large cooling unit swings out for cleaning; it now boasts wider-spaced cooling fins – to reduce clogging. 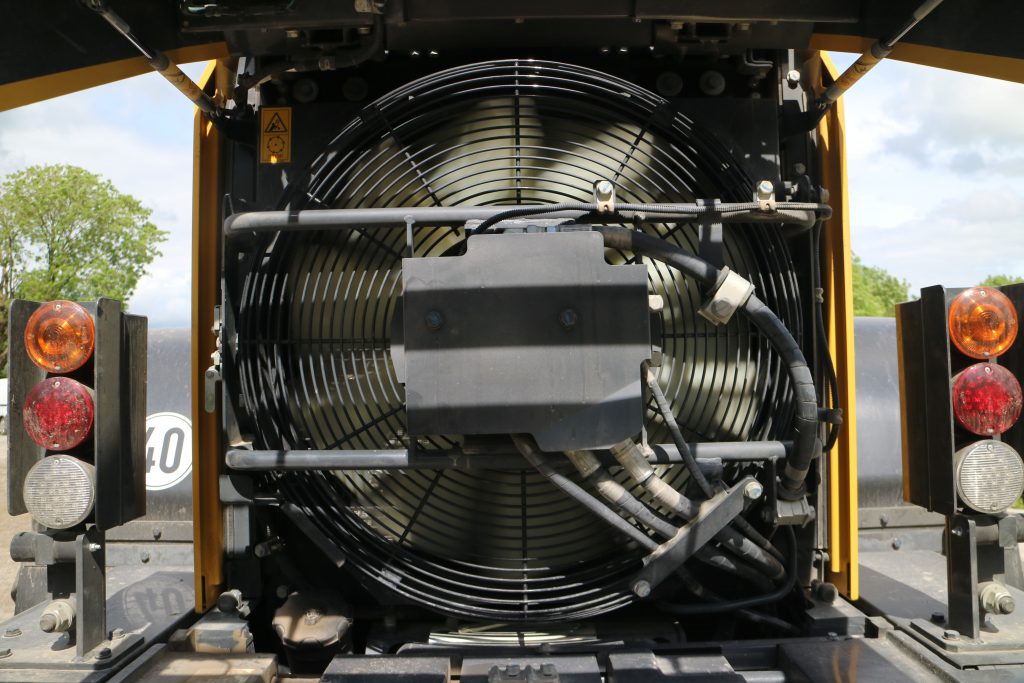 Thus far, Geoghegan has used the loader for all sorts of farm and contracting duties, including loading a 10t K Two rear-discharge dung spreader and pushing up silage from his three Pottinger wagons – two Torro models and a Jumbo.

He said: “So far, we have put almost 1,000 hours on the Komatsu and haven’t had any problems. The performance of the machine is impressive; it’s been a big step in the right direction for the business.” 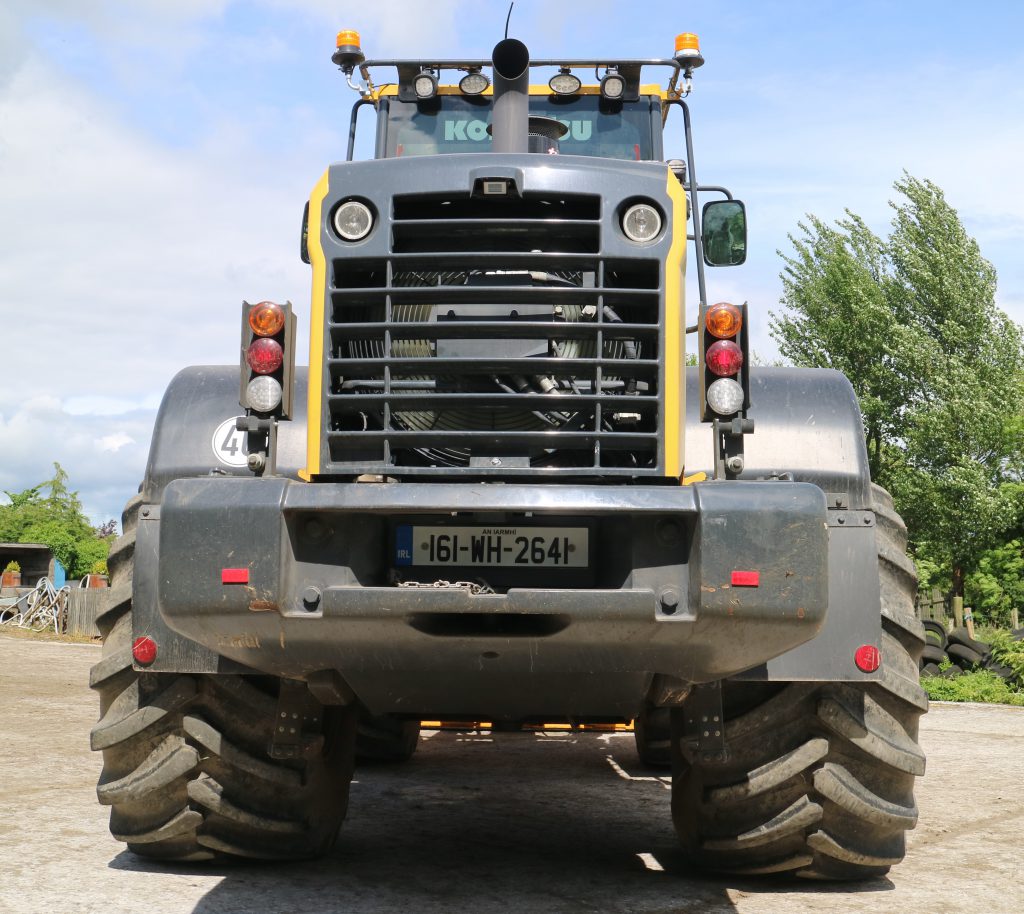 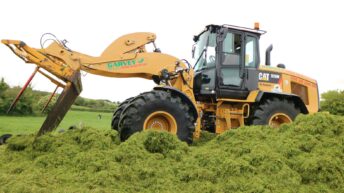