Video: ‘The silage bale transporter results came back – with €52/hour of a saving’

AgriLand paid a visit to Co. Kilkenny to meet a man who’s built his own self-loading bale transporter. The machine can ferry 16 (wrapped) round bales at a time.

In this video (below – shot by John W Anderson), we spoke to Tom Carrigan (pictured above) to find out why he designed and fabricated the machine.

He joked: “I’m a dairy farmer with ‘engineering issues’ here in Kilkenny.

“This [bale transporter] project dates back nearly seven or eight years at this stage – from when we came up with the original design to the finished prototype that you see here.”

He explained: “It’s like the progression of baled silage. First of all you had the baler; then the wrapper. Then the [McHale] Fusion came along and, all of a sudden, everything was so much more rapid.

Then you had the problem of a massive amount of bales in the field that still had to be brought in. You were still dealing with a tractor and a handler – so I wanted a quicker process.

He went on (in the video) to explain why some existing (self-loading) bale transporters had apparent short-comings – either in terms of the number of bales they could carry or how they deposited those bales in the yard.

Tom said: “I had this design in my head for a long time. From the front of the trailer to the back is 17ft long; it’s quite compact.

“We can off-load the bales in stacks of eight; we can stack them two high.

“The other thing is that the bales are completely safe in transport; they cannot come off the trailer; they’re locked into it.”

He added: “It’s a one-man operation.” 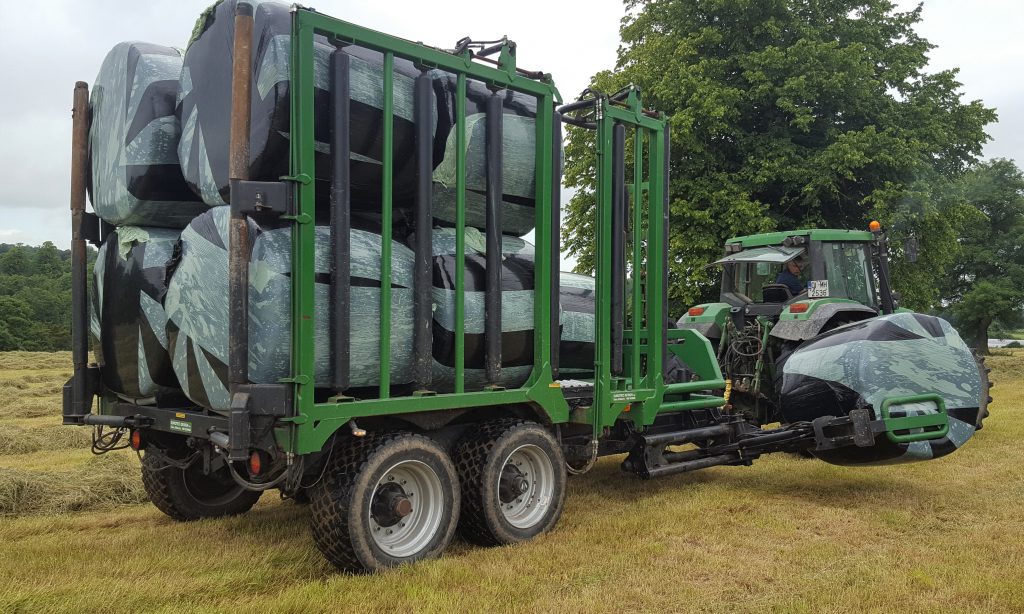 Tom also noted that the machine featured prominently in the ‘Innovation Arena’ at the National Ploughing Championships three years ago. That led to talks with Irish machinery manufacturers; some of these discussions have not yet concluded.

He noted: “We’ve loaned this trailer to contractors, who’ve used this and their own systems – two trailers; two labour units.

The results came back; [there was] in the region of €52/hour of a saving.

“So it’s not really what kind of money you make drawing the bales; it’s the money you’re saving. That’s the big thing with this.”

Video: 'It's as good as a new tractor, but you can fix this with a spanner'