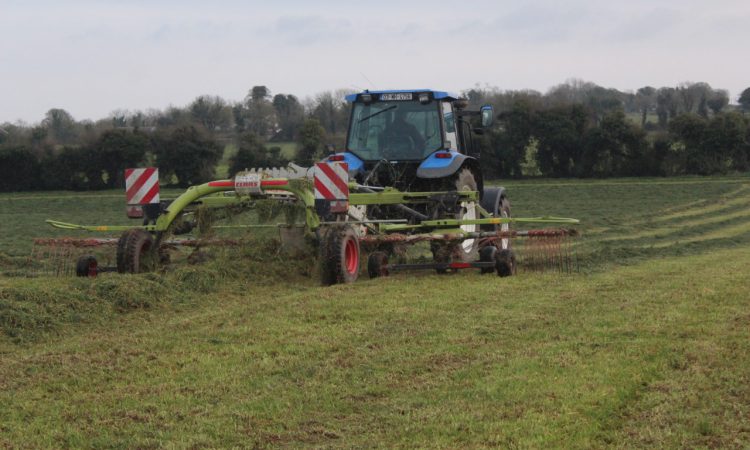 Last week, Martin Hanley from Tara in Navan, Co. Meath, got his first phone call of the silage season from a local dairy farmer, who was looking to bale a field that had been reseeded last August.

The plan was to graze the field towards the back end of 2019; however, due to poor weather conditions, he never got the chance to do that.

So, last week, he made the call to make bales out of it, as it had “gone too strong” for the cows to graze.

This, in turn, led him to make contact with Martin, who is the local agricultural contractor in the area, to see could he cut and bale it for him.

Despite being an unusual time of the year for making silage, Martin, without hesitation, got his silage-making equipment ready and he made his way down to the field.

The crop was cut on Wednesday last, March 25. Afterwards, the decision was then made to let the grass dry out before it was to be raked and baled.

On Friday last, March 27, Martin landed down with his New Holland TS100 and his Class Liner 2700 rake and raked up the crop, which was to be baled the next day.

Speaking to AgriLand, Martin said: “It was an unexpected phone call to get at this time of the year for sure.

“The weather we have got since last August has been nothing short of dreadful, which was the main reason why the field was baled for silage.

“There was no opportunity to let cows in and graze it last autumn and, by the time the land was dry enough to let the cows out to pasture, it had gone too strong to let cattle into it.

There was a nice crop of grass in it. It worked out at five bales to the acre, with over 11ac in the field in total.

“I’d normally cut a bit of grass on my own farm before the silage season starts, which is usually the last week of April, and test out the machinery to see if it is in good working order.

“However, this year it was different; we got to test out the gear on Martin’s farm and thankfully everything seemed to be working well, with only one or two slight issues popping up.” 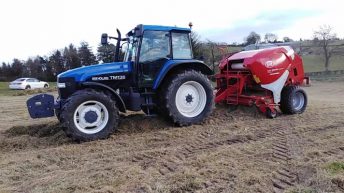