A cow had a lucky escape in Athlone recently when members of the Royal National Lifeboat Institute (RNLI) were called in to rescue her from a quagmire of mud, where she had been trapped.

The incident occurred yesterday morning at approximately 10:33am, according to the RNLI.

In a statement on the matter, the lifesaving marine charity explained that Malin Head Coast Guard had requested Lough Ree RNLI launch to assist in the rescue of a cow that was stuck in the mud at Long Island, two miles south of Athlone.

When they arrived on scene, the RNLI crew met with the farmers who were there to discuss what assistance they could provide to free the cow who was up to her shoulders in the mud.

Two of the lifeboat crew members entered the water and got a rope around the cow’s neck to gently encourage the cow towards the shore in the hope that she could free herself. Lough Ree RNLI posted a video of the rescue mission on its Facebook page, detailing the operation.

It became apparent that, while the cow could move one leg at a time, she was in too deep to be able to make her own way out.

The other farmers on the shore were then able to very gently pull the cow out using the tractor to free her. Once ashore, the cow was reunited with the rest of the herd and the lifeboat crew returned to base. 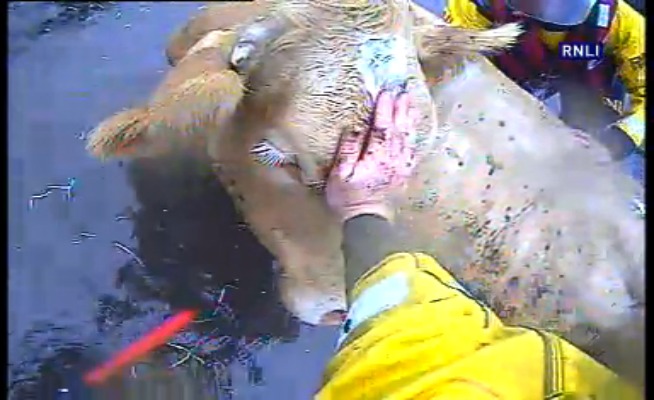 Speaking after the call out, Lough Ree RNLI helm Tom Bradbury said: “We were delighted to be able to assist the farmers in rescuing their cow and reunite her with her calf and the rest of the herd.

“If you see anyone, human or animal struggling in the water, don’t get into the water yourself, call 999/112 and ask for the Coast Guard.”

Collision involving a tractor in Donegal