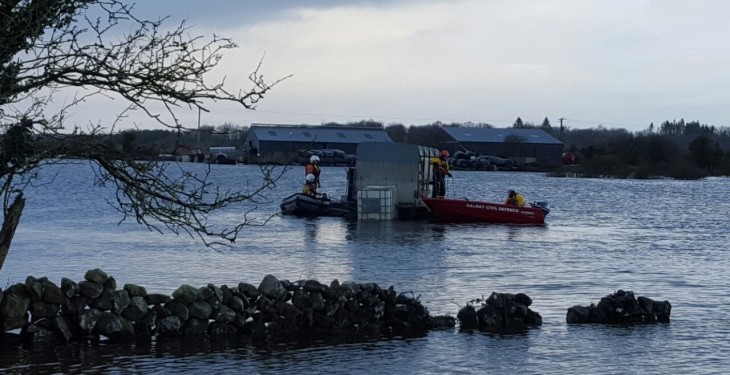 A number of farmers in Galway remain affected by the flooding caused by the winter storms, as over €600,000 has been paid out in flood relief through the fodder aid scheme.

Joe Rock, who farms 100ac near Gort in the south of the county, was left with only 2ac of land that was not flooded this year.

And, he said, if it happens again he won’t be able to keep going. The suckler farmer said that he was badly hit by the flooding and that he was surrounded by water.

His land had been submerged already during the 2009 flooding, however the water this time around was 3ft higher.

Rock had silage bales stored three bales high and lost the bottom row of bales to the flooding.

We were three days trying to get the cattle out…we had to use a pontoon to get them out.

“It will be into May before it fully recedes and a lot of it will need to be re-seeded.

“It will take another couple of weeks to go down…we’ll take it day-by-day.”

This video by Liam Burke shows Rock’s cattle being removed from the flooded field with the pontoon earlier this year.

‘It’s made a mess of the land’

Micheál Flaherty is another farmer still affected by the flooding. The water is still in his yard in Tierneevin near Gort although it has gone out of the sheds.

“It’s made a mess of the land – the paddocks were badly flooded.”

Flaherty is a dairy farmer and every shed he had was flooded, including the milking parlour and the cubicles.

He had to let his 96 cows out on January 1 such was the extent of the flooding and could only bring them back in on January 28.

About 12ac out of the 50ac I had were able to be grazed. I had to let the cows out for four weeks.

“I still let them out by day but I can put them back in the shed at night now.”

Flaherty’s silage pit was under 3-4ft of water due to the flooding and, like Joe Rock, Flaherty says he will have to re-seed the land.

“There’s no point in me doing this [farming] if it keeps happening. Luckily enough, my house is a good distance from the yard.

“It’s getting worse and there’s nothing at all being done. There’s not a word about it. All the roads are still blocked.

“If it happened in Dublin we’d never hear the end of it.”