Video: EU not going to be flooded with milk post quota – Hogan 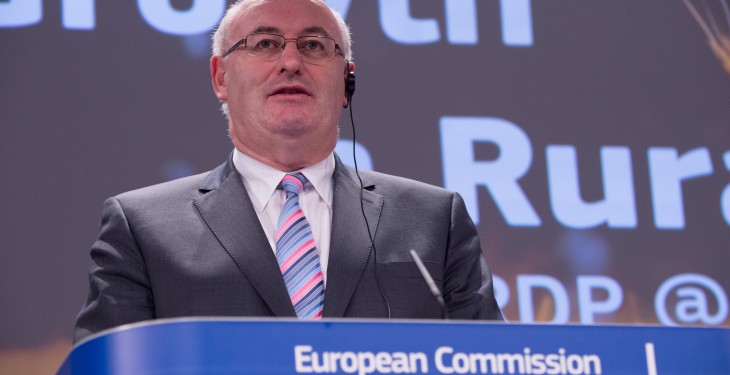 The European Union will not be flooded with milk post quota despite the intentions of some Member States to increase dairy production, according to European Agriculture Commissioner Phil Hogan.

At a press conference on the abolition of milk quotas in Brussels, he told reporters that a lot of people were worried that the European Union was going to be flooded with milk. However, he said there is about seven to eight Member States considering increasing production including Ireland.

“But you must remember that the Republic of Ireland contributes about 1% of the overall milk supply of the world or 5% of the EU so additional increase of milk production in Ireland post quota is not going to flood the EU with milk.”

Commissioner Hogan said the EU has seen an increase already of 5.5% in milk production right across the EU in 2014.

“We have coped fairly well with that in terms of markets and price. The price is the same now as it was two years ago in spite of the fact that we had a massive increase in production last year,” he said.

Commissioner Hogan marked the end of 30 years of milk quota with a major press conference in Brussels.

He said the abolition of the quota will always raise questions about price volatility.

“We will continue to have market measures available to us in the event of a market crisis,” he said.

Commissioner Hogan said that the Commission are also exploring through the financial instruments and with Member States opportunities to confront short term volatility by supply chain contracts, foxed contracts, forward contracts and price differentiation according to volumes.

All those elements, he said, can be explored by the dairy industry to reduce the price volatility fears of producers.

“I will continue to remain vigilant in case there is a major threat to the milk market,” he said.

“After a long time of strong governmental involvement in the dairy market industry, now it has to find its way to adopt to the new reality.

“But I am full committed to supporting the continued market orientation of the dairy sector and I’m confident the sector has a bright and prosperous future,” he added.