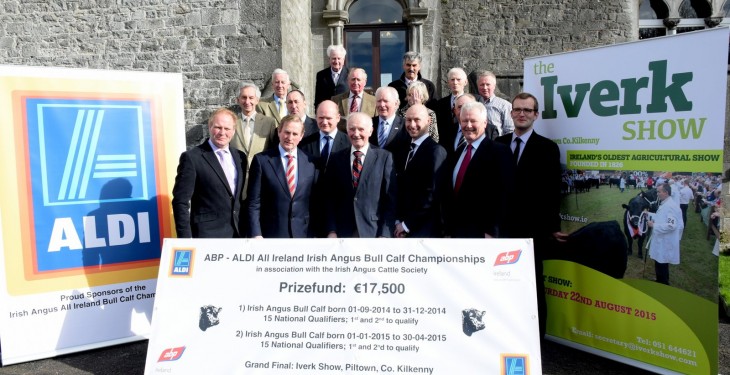 An Taoiseach Enda Kenny at the official launch of the Championships

This year’s All Ireland Irish Angus Bull Calf Championship will have a total prize fund of €17,500, making it the biggest championship in the country if not in Europe, organisers say.

Organisers say that following on from the past two years the Championship will again have two All Ireland finals at the Iverk Show, the oldest show in the country.

Rob Farrell, Group Buying Director at Aldi Ireland said that Aldi is delighted to continue its sponsorship of the All Ireland Irish Angus Bull Calf Championship at The Iverk Show. He said it is a great opportunity for Irish Angus breeders to highlight these top quality cattle to the public.

“There will be 30 qualifiers at different shows throughout the country. Two calves will be selected from each qualifier to come to Iverk for the finals. Prize money for first and second in the qualifiers will be paid out in Piltown on final day,” organisers of the show say.

Organisers say that quality meat is what the public want and the Irish Angus has it in abundance. They say that a second bonus for the Angus breeders is that they are recognised as an easy calving breed.

The 2015 Championship was officially launched by An Taoiseach Enda Kenny at Kilkenny Castle recently will take place at this years Iverk Show and it is sponsored by Aldi in conjunction with ABP Ireland and the Irish Angus Cattle Society.

The Iverk Show takes place at the Showground in Piltown, Co. Kilkenny on August 22.