Video: Commemorating the march for farmers’ rights 50 years on 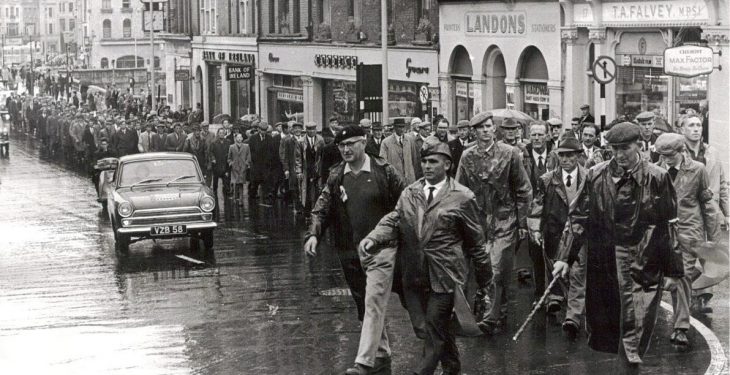 Commemorations took place in Bantry Co. Cork today, October 27, to mark the 50th anniversary of the Farmers’ Rights Campaign of 1966.

The commemorations, which were led by the Irish Farmers’ Association (IFA) President Joe Healy, remembered the day that 16 men left the square in Bantry in October, 1966.

Healy said the campaign of 1966 was the most important event in the history of IFA, formerly known as the National Farmer’s Association (NFA).

Today is about honouring those who marched in ’66. Their sacrifice and commitment to the cause must never be forgotten.

“Without them, we in the NFA and IFA could not have achieved so much on behalf of farm families.

“The right to negotiate, which we fought for 50 years ago, is as important today as it was in 1966. Those who answered the call half a century ago are owed a huge debt of gratitude from farmers today,” Healy said.

The campaign was defined by the determination, commitment and perseverance of a group of people for the betterment of farm families, Healy also said.

The IFA President was reminded of the contribution of those who participated in the Farmers Rights Campaign during meetings in the lead up to the recent Budget.

At that meeting, we were in a position to make a strong case on behalf of farm families. And we came away with a package to improve incomes.

The men who left Bantry, in 1966, marched 217 miles (350km) to Dublin and were joined by some 30,000 farmers along the way to seek negotiating rights with the Government, according to the IFA.

However, on arrival the Minister for Agriculture Charles Haughey reportedly refused to meet an IFA delegation.

Nine men remained outside on the steps for three weeks until they were eventually granted a meeting and their right to negotiate on the behalf of farm families was recognised.

A plaque was unveiled in Bantry square today, with surviving veterans and family members representing the 16 men who began the march present for the unveiling.

Archive footage below shows the scale of the protests and the amount of people that took part in the march for farmers’ rights.

The footage also features interviews with Rickard Deasy, who led the 16 marchers out of the square in Bantry and TJ Maher, who was one of the nine men that sat on the steps and who succeeded Deasy as President of the NFA/IFA.