ABP Food Group’s R&D farm in Clonegal, Co. Carlow is home to a herd of mainly Angus and Hereford steers and heifers.

Established in 2015, the farm is the base for the company’s research on dairy-beef systems. This work is carried out in conjunction with the ICBF (Irish Cattle Breeding Federation) and Teagasc. It’s also ABP’s largest Blade Farming operation in Ireland.

Owned and operated by Michael and James Sheppard, the 280ac farm carries beef-sired progeny from the dairy herd to slaughter.

The brothers have been in partnership with ABP for the last three years; they sent 364 cattle to slaughter between the end of 2016 and the start of 2017.

These cattle included 185 Angus (73 heifers and 112 steers) and 178 Herefords (62 heifers and 116 steers). All of these animals were processed in the ABP plant in Cahir, Co. Tipperary.

The farm is split into three separate blocks and all of the paddocks on the farm have been reseeded since the project began.

The system is primarily focused on grass-based production and, generally speaking, cattle are turned out to grass in early February and are returned to winter housing in mid-November. 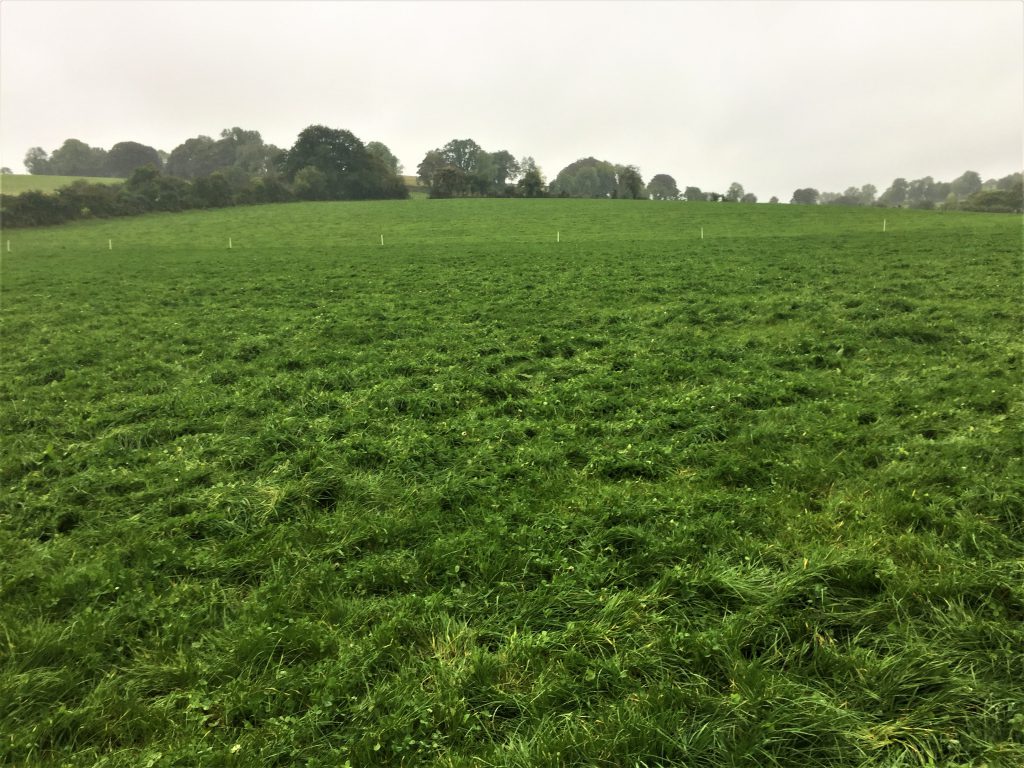 The Carlow-based farm plays a central role in the Gene Ireland Dairy Beef Breeding Programme. This is an initiative undertaken by the ICBF, partner AI companies, Teagasc and ABP to help identify young beef-bred AI sires to maximise the beef traits of the progeny produced by dairy dams.

Since its establishment, 45 bulls from six various breeds (mainly Angus and Hereford) have been progeny tested through the programme. In addition, 15,000 AI straws were dispatched to over 200 herds since the programme was founded in 2015.

A key focus of the Gene Ireland programme is the generation and collection of data. The stringent recording carried out on the Carlow-based farm adds valuable information to this database.

The timing of this project is particularly important; especially when we consider the growth and expansion of the Irish dairy herd since the shackles of milk quotas were removed.

Over recent years, the Irish dairy industry has focused on improving the fertility of its cows. This has moved Ireland into a unique position globally; it essentially means that Irish farmers will have to use less dairy semen to produce replacements on their farms in the future. 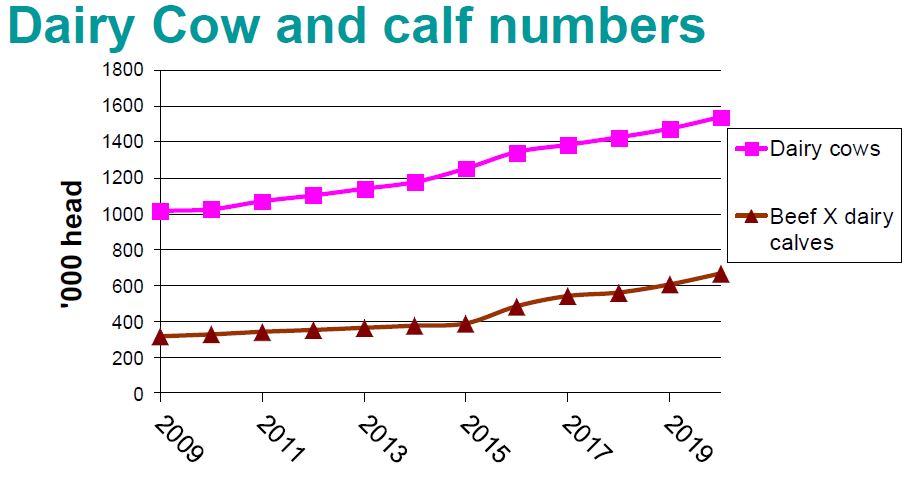 However, it does mean that the number of cows available to be served to beef sires is likely to increase in the coming years.

By 2021, it’s expected that 630,000 beef-cross calves will become available from the dairy herd. As a result, the face of the Irish beef kill is expected to change significantly.

Early indications suggest that dairy-origin animals, either beef crosses or pure dairy, will account for approximately 60% of the Irish beef kill in the coming years – up from 45% currently.

Given this expected growth, it’s important that the genetic potential of these animals for beef production is maximised. And, from ABP’s perspective, it’s critical that these animals meet market requirements.

Finbarr McDonnell, CEO of ABP’s beef division, said: “We need calves coming from the dairy industry to be saleable and, as processors, we need to protect our raw materials.

We also need cattle within the target specification. From a sustainability point of view, cattle aged 19 (heifers) and 21 (steers) months are produced more economically and more efficiently; these are the specifications that the retailers want.

All of this work is being overseen by ABP’s Stephen Connolly, who is undertaking a PhD with Teagasc and the Cork Institute of Technology (CIT).

At today’s open day, Connolly gave those in attendance an overview of the performance achieved under the programme to date.

The initial results of the trial, he said, demonstrate the strength of genetic evaluations and show that sires with higher genetic merit deliver higher-value, more profitable progeny. 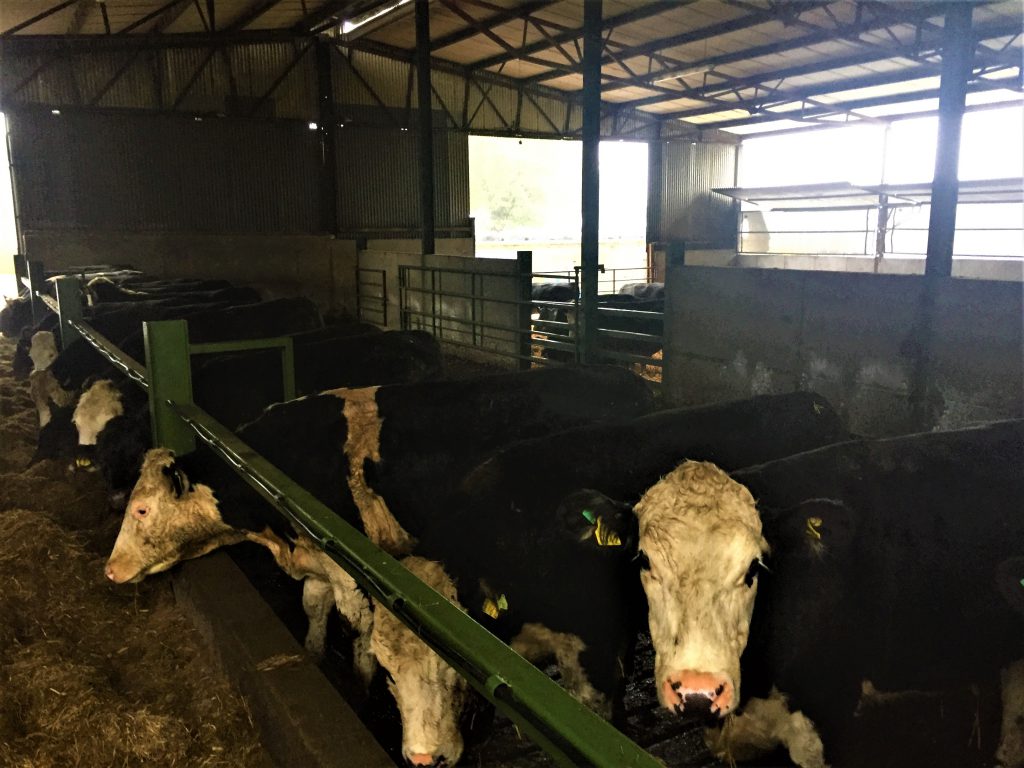 All of the above mentioned 364 animals were born to Holstein Friesian cows (second parity or greater) and were sired by 29 sires (27 AI sires and two stock bulls).

The results of the trial generated some interesting results; particularly in relation to carcass weights.

For heifers, the trial showed a variation of almost 70kg in carcass weight between progeny of different Angus sires. The carcass weight difference was just 22.57kg for the Hereford heifers under the study.

The table below outlines the performance of heifers sired by various Angus and Hereford sires.

Looking at Angus first, the carcass weight difference between the best and worst performing progeny stood at 69.52kg.

In value terms, that’s worth €290/head based on current prices, Quality Assurance payments, breed bonuses and the number of days spent on-farm. 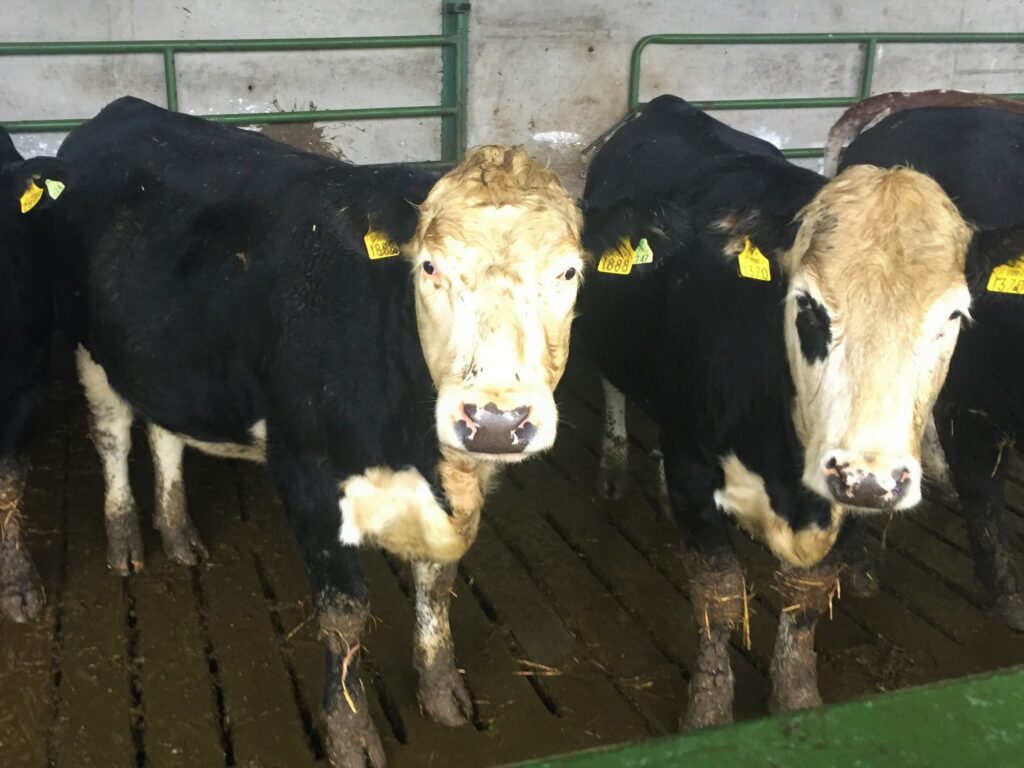 Moving on to the Hereford heifers, a 22.57kg difference was identified between the progeny of best and worst performing sires. When calculated out, that’s worth an additional €187/head to the beef finisher’s bottom line.

Like the heifers, a significant carcass weight difference was also identified between the top-performing and bottom-performing Hereford and Angus steers.

For Herefords, Connolly said, the carcass weight difference between the top and bottom animals stood at 48.86kg. In euro terms, that’s a price differential of €218.

Similarly, the carcass weight variation between the best-performing and worst-performing sires was 32.68kg or €191/head in monetary terms.

How much did the cattle eat?

As part of the study, 50 steers (25 Angus and 25 Hereford) were also entered into a feed efficiency trial at the ICBF’s National Bull Performance Test Centre at Tully.

After a short acclimatisation period, Connolly said that these animals were finished over a 77-day period.

Due to these results, it’s safe to say that the trial demonstrated considerable variation between progeny of different sires in terms of carcass weight, average daily gain and feed efficiency.

This area is currently being studied further as 100 animals (50 steers and 50 heifers) from the farm have entered a repeat trial in Tully.