Rules and regulations from the EU on issues such as veterinary medicine, climate change and biodiversity have been slammed as ‘red tape’ by one TD.

Michael Fitzmaurice argued that this level of bureaucracy is “heavily impacting” on Ireland, notably on the agri-food sector and similar sectors.

Speaking today (Thursday, February 11), the independent Roscommon-Galway TD cited the example of veterinary medicine, which came up for discussion this week at the Joint Oireachtas Committee on Agriculture, Food and the Marine.

It is expected that from January 2022, an exception under an EU directive in the early 2000s that allowed veterinary medicine to be sold without a prescription will no longer apply to Ireland, meaning these medicines will need a prescription from that point.

“It is because of this directive that licensed merchants, who have a QQI qualification, are fearful of losing their incomes,” Fitzmaurice said.

He continued: “These people offer a valuable service to farmers and provide detailed advice on the administration of anthelmintic veterinary medicines to farm animals.

“Yet this directive is the reason many fear their livelihood will be significantly diminished if all medicines must be prescribed by a vet,” he argued.

The farmers on the ground will also likely be hit with an additional charge for seeking this prescription, depleting their already-low profit margins even further.

The TD warned that there is a possibility that farmers will look towards Northern Ireland to purchase these products if they are cheaper there than here.

A similar example of “red tape” is, according to Fitzmaurice, the Habitats Directive, which he claimed “has hindered this country in making critical decision for years”.

“We have cases where flooding could be prevented through proper maintenance of rivers or other engineering solutions, but the Habitats Directive and the red tape it brings has blocked potential progress,” he argued.

In some instances, the flooding has already negatively impacted the habitats the directive is there to supposedly protect.

On another topic related to the environment, the TD said it was “utter madness” to import peat from other countries while there is peat available here.

“There is talk about alternatives for the horticulture sector, but they are not up to scratch yet. A transition period must be allowed. You cannot choose to ‘turn off a tap’ overnight and expect a sector to survive,” he stressed.

When it comes down to energy and the recent closure of the power stations here, we are leaving ourselves at the mercy of depending on the UK.

“It seems as if Ireland is in a race to close indigenous industries in order to be viewed as the golden student; but in doing so, we are leaving ourselves extremely vulnerable and dependent on others,” Fitzmaurice concluded. 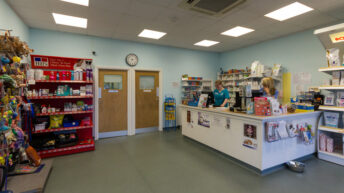