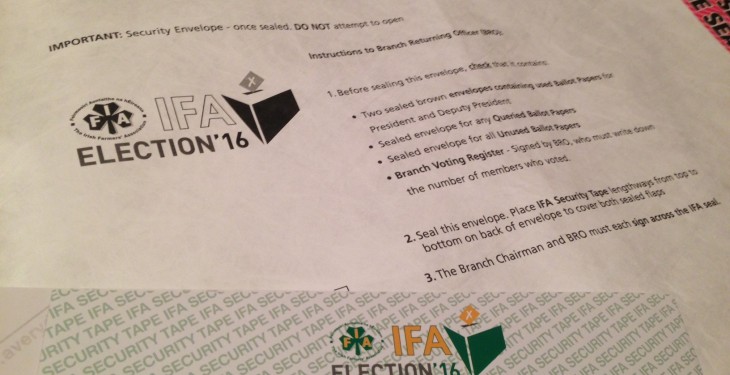 Voting got underway earlier this week for the 2016 IFA Elections for President and Deputy President.

Early indications suggested that there was a good turnout at branches across the country.

Several County Chairmen have said that turnout has been good, despite it being a very busy time for farmers between lambing, calving and other farming activities that take place in the months of March and April.

Galway IFA County Chairman, Pat Murphy, told Agriland that turnout has been very high in the county. He said that Athenry, the branch of Presidential candidate Joe Healy, had over 90% turnout.

Other branches in the county also have very high turnouts with 56 out of 73 members in Kiltullagh coming out to vote and 78 out of 110 voting in Headford.

Murphy said there’s a lot of effort going in to this election and the branches are responding.

Despite two Roscommon branches, Strokestown and Boyle, refusing to vote until the Connacht IFA controversy is sorted, turnout has been in the region of 30-50%, County Chairman John Hanley has said.

We started voting on Tuesday and some branches have a third of members coming out to vote while others have over half.

“In Moore last night over 60% of the branch cast their votes.”

Meanwhile, Wexford IFA Chairman Pat Murray said that he’s quite surprised by the numbers that have come out to vote in the IFA Elections, with turnout over 60% in many branches.

He said that in a couple of smaller branches turnout has been around the 30% mark but that he’s happily surprised with the interest.

Members are also voicing their opinions at the branch voting. Murray said that farm incomes is the number one issue in the county.

According to Tipperary North County Chairman Tim Cullinan, turnout is averaging around 50%.

There’s good turnouts and there’s a lot of positives to take from that. Members want to move on with the new regime in IFA.

Cullinan said that he’s hoping to get a good amount of members out to vote.

Turnout in the home county of Nigel Renaghan, Deputy Presidential candidate, has been good.

He’s expecting the county to support the local candidate Nigel Renaghan in the election for Deputy President.

Turnout has been good in Cavan, with Nigel Renaghan receiving support from his neighbouring county, James Speares, the Cavan County Chair told Agriland.

“In the Presidential election I didn’t see anyone standing out but it is very prominent that Nigel Renaghan is getting support.”

In the banner county, County Chairman Andrew Dundas has said that turnout has been ok so far but that he doesn’t expect it to be too high.

In Bridgetown earlier this week 31 out of 70 members were out to vote. He said that the election at this time of year is a disaster [with calving and lambing going on].