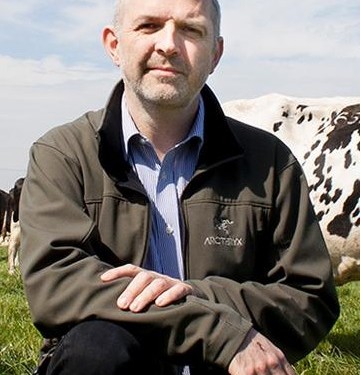 “We need to try to understand that and design management systems around the animal, rather than make the animals fit our systems. This is not necessarily from the point of view of animal welfare, but with the aim to make systems more efficient.”

This is the opinion of Harper Adams University’s Dr Mark Rutter who has recently been promoted to Reader thanks to his strong record of research on animal behaviour.

The position denotes an appointment for a senior academic with a distinguished international reputation in research or scholarship. As Reader in Applied Animal Behaviour, Dr Rutter’s work will focus on how the study of farm animal behaviour can be used to develop more efficient, sustainable livestock systems.

“One of the things animals probably value is the ability to have some control over their environment. In experiments conducted by a PhD student I am supervising, Priya Motupalli, we have shown that where cows had the choice of being housed in cubicles or going outside to pasture, they produced more than 6kg more milk than those which were continually housed.

“Part of that is, we think, because they were eating grass outside, so eating more overall. But I also think part of the reason for the greater levels of production was because it was less stressful for them – they could walk away from the dominant cow rather than experience fear when she was in close proximity.”

Rutter said: “I see my future role as trying to make our systems more efficient by taking the animals’ patterns of behaviour into account. By thinking about behaviour, genetic background, and an animal’s domestication and evolutionary history, we can develop systems that are more productive and potentially more sustainable.

He commented: “It’s not just about sustainable intensification, but also sustainable efficiency. How can we use technology to meet the individual needs of animals?

“With the intensification of agriculture, there has been a tendency to manage to the mean, for example, to feed according to the average animal. But my earlier research has shown that even the average animal, over the course of one day, changes what it wants to eat.”