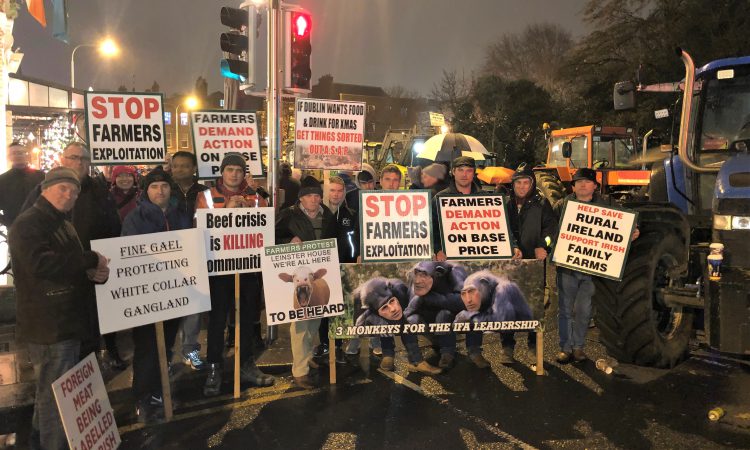 More than 100 farmers are continuing to hold their protest line in the heart of Dublin’s city centre tonight, Tuesday, November 26, as they seek to reach out to the Minister for Agriculture, Food and the Marine, Michael Creed.

Almost 60 tractors and a number of 4X4s and trailers are currently blocking St. Stephen’s Green, just up the road from Agriculture House on Kildare Street.

AgriLand understands that five key individuals – that are said to be representing the group of farmers from across the country – met with a department official this evening in a bid to arrange a meeting with Minister Creed.

It is understood that the farmers presented a letter outlining a list of eight demands that the group wants the minister to address.

These points include concerns on: sustainable family farm incomes; the convening of the Beef Market Taskforce; the implementation of a farmer-friendly climate change policy; and the appointment of a regulator to protect farmers.

Speaking to AgriLand tonight one of the five representatives said that the group is seeking an opportunity to “personally” hand their letter to Minister Creed and to agree a time-frame for the implementation of their priorities.

The representative said if this engagement is reached they are “willing to disband” the protest – which began shortly after midday today.

Otherwise, the group says it expects that more farmers will arrive to support their plight over the next 12-24 hours.

It is believed that the group is also urging other farm lobby groups to row in behind their protest.

Speaking in the Dáil earlier this afternoon, Minister Creed acknowledged the protest and the significant  difficulties that many farmers currently face on the ground.

On the issue of convening the taskforce – which was prevented from holding it first official meeting on October 14 last, due to a previous protest at the entrance to the department offices – the minister stated that while progress had been made, some challenges remain.

“There are specific issues regarding the convening of the taskforce and I think members are quite well aware of them.

“It has been alluded to that injunctions still remain, they remain granted to a company that is not part of the talks,” he said.

Stay tuned to AgriLand for further updates on this story… 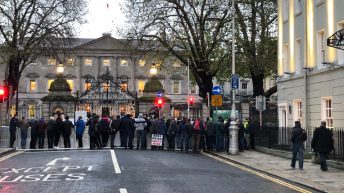