IFA has published remuneration figures for the association’s key management personnel and it has also published the average remuneration (pay and pension) of the 15 next highest paid staff positions.

The association disclosed the figures, following the presentation of the final report of the IFA’s Implementation Committee at today’s IFA Executive Council.

In order to provide maximum transparency to its members, IFA has given a breakdown of key management personnel figures of the following:

The Implementation Committee engaged independent experts to carry out a review and benchmarking exercise on staff pay in the association. 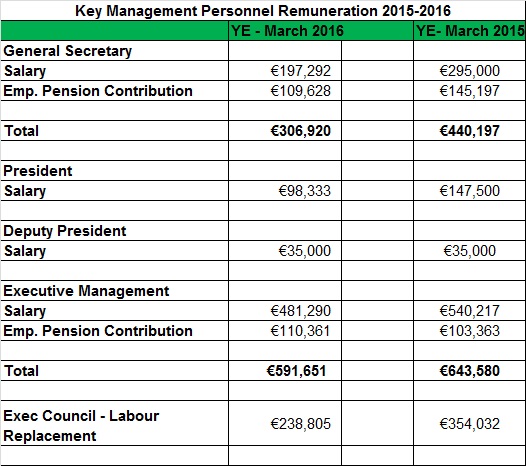 The Lucey Implementation Committee, set up following a recommendation from the Con Lucey report, retained Mercer Consultants to benchmark the salaries of a number of IFA staff positions and committed to disclosing the average remuneration of the top 15 salaried positions after Executive Management.

IFA has said that this average does not form part of key Management Personnel data.

The table below shows the average remuneration of the top 15 staff after Executive Management:

The benchmarking process carried out by Mercer noted that overall, remuneration levels were broadly in line with what it would expect from an organisation such as IFA.

However, Mercer also noted that, there did seem to be a wider range of salaries than it would have expected at the executive secretary level (which it said it understands reflects the value of the sector an individual represents and the experience this requires).

Also at today’s Executive Council, National Treasurer Jer Bergin updated Council members on the latest financial position of IFA with the management accounts for the six months to end September 2016.

Membership income has fallen by 8% compared to the same period in 2015 and the current number stands at 72,376.

The operating result for IFA was a positive €127,000, but the effect of new accounting rules under FRS102 involving valuation changes altered this position to produce a deficit.

Operational income for April to September 2016 is down 17% on the corresponding period last year and operational expenditure is down 7% for the same period. Taking exceptional items into account, this has created a deficit of €830,000

Addressing the IFA Executive Council today, IFA President Joe Healy said he was pleased to announce that the recommendations of the Implementation Committee have been discussed at national and local level within the organisation and accepted in full as part of the rebuilding of trust and transparency within the association.

“At our AGM in April, I pledged to put in place maximum transparency and high standards of governance within IFA to rebuild trust and credibility among farmers.”

We will now move forward to ensure the association is adequately resourced and equipped to continue to deliver the best possible results for farm families.

The Chairman of the Implementation Committee Teddy Cashman presented his final report to today’s Executive Council, which outlined a number of additional measures to ensure high standards of governance are in place to provide a basis for member confidence in the activities of IFA.

The Committee was established to implement the recommendations contained in the Lucey Report of December 2015.

The measures to strengthen governance include: