Tiny live calf born in the US weighing just 4.5kg 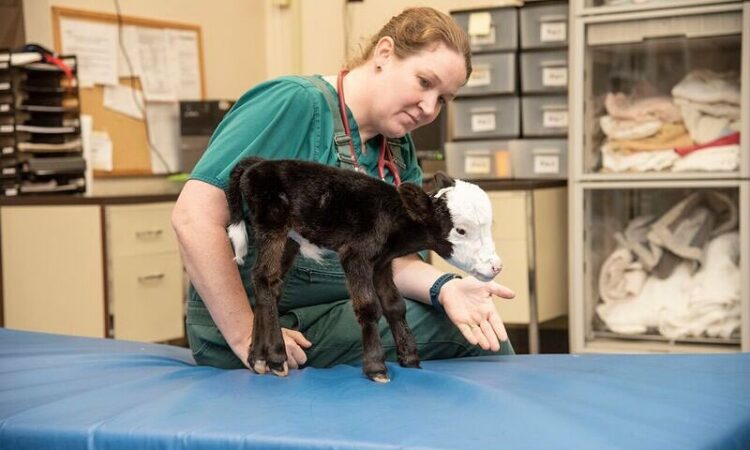 A tiny calf, weighing just 4.5kg, was born in the US in recent days, appropriately named “Lil’ Bill” by the veterinary university he was brought to.

Weighing about a tenth of the size of a typical newborn calf, the diminutive new-born was brought to the Mississippi State University College of Veterinary Medicine which posted photos of “Bill” on social media.

Posting on Facebook, the veterinary college account said: “Occasionally, we get a case that has us scratching our heads a bit. Lil’ Bill is one of those cases!

“He was born weighing a little over one tenth of what newborn calves typically weigh.”

The college noted that the calf weighed just 10lb (4.54kg) and promised to provide updates on the bitty bovine’s progress.

On the other end of the scale, a beef farmer has recently brought big attention to a particular beef animal in his ownership that is claimed to be “the biggest cow in Australia – if not, the world”.

Geoff is a beef farmer in Western Australia who bought the bullock in Brunswick at a price of approximately $400.

It is understood this bullock’s colossal size has gotten him off the hook as the bullock is reportedly “too big for the abattoir”. Geoff noted that the bullock “was unable to fit into the supply chain”.

It is reported that the bullock will see out his days on Geoff’s Lake Preston farm where he is running along with a herd of Wagyu cattle. Geoff added that the mammoth bullock is “pretty much the leader of the pack”.

The animal is a seven-year-old Holstein Friesian and from hoof to hind, he measures 194cm.

Geoff outlined: “We knew that he was always going to grow into a big steer but we never realised that he would get this big.”

The proud owner of the monstrous bovine explained the difficulty he encountered when trying to weigh the bullock that is known as ‘knickers’.

“He is a big animal, we couldn’t put him on the crush scales but we put him on the platform scales on which can weigh multiple amounts of animals at once.”

Geoff explained that the bullock weighed in at 1.4t on the scales. In context, this is the same weight as a female Hippopotamus. 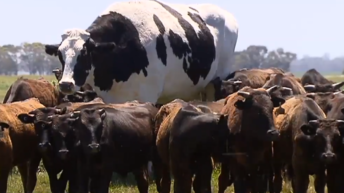