Changing from a conventional, high-intensity tillage farm to an organic farm is a big move and one that wasn’t taken lightly by the Jacksons, who both farm outside Birr in Co. Offaly.

The pair both work off-farm. Ross is an independent agricultural consultant, while Amy works at nearby Gurteen Agricultural College.

Barley, wheat, oats, oilseed rape and fodder beet were once grown on the farm, which now plays host to high-value cereal crops – organic oats for Flahavan’s and malting barley for Waterford Distillery – as well as a flock of sheep and herd of cattle.

Amy and Ross Jackson entered conversion to the organic system in 2015. Ross’s brother Alan had converted to organics previously and having seen what was involved the pair decided to make the move. 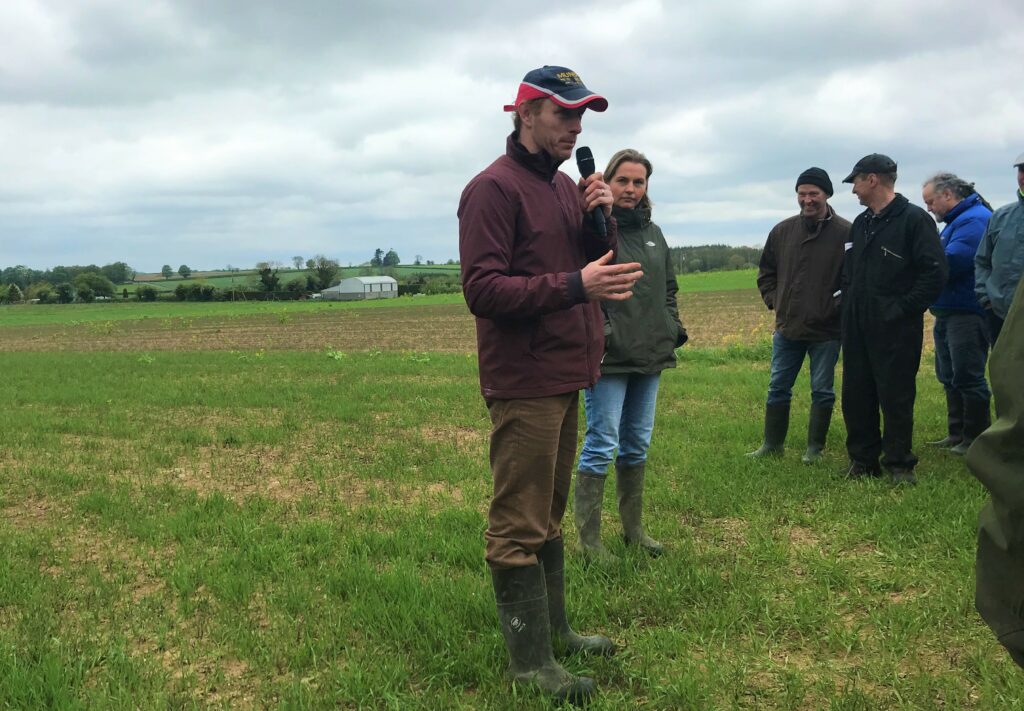 Ross Jackson speaking at the Teagasc Organic farm walk. Ross’s wife Amy who manages the sheep enterprise is pictured to the right

This meant changing to a mixed farming enterprise so that grass could be included in the crop rotation, in order to help with organic matter build up.

A mixture of farming practices are used on the farm. For example, Ross is a member of BASE (Biodiversity, Agriculture, Soil and Environment) Ireland and has begun to plant companion crops to suppress weeds.

When AgriLand arrived the spring cereal crops had emerged. Olympus malting barley was planted at the end of March, while Husky oats were planted on April 2.

Weeds are probably one of the biggest challenges in an organic system and Ross is constantly trying to meet this challenge. He is currently trialing some different techniques.

“Last year was a very good year. I know there was a drought, but there was very little disease and because there was so little rain there were very little weeds as well.

This year is going to be a different year – you can see weeds coming up.

A control method that Ross tried this year was the use of a tine harrow. He ran a tine harrow through the crop at the three-to-four leaf stage and spread clover seed with a grass spinner.

This will provide ground cover, which will help to suppress weeds and reduce soil erosion, but also build up organic matter when ploughed back into the soil. 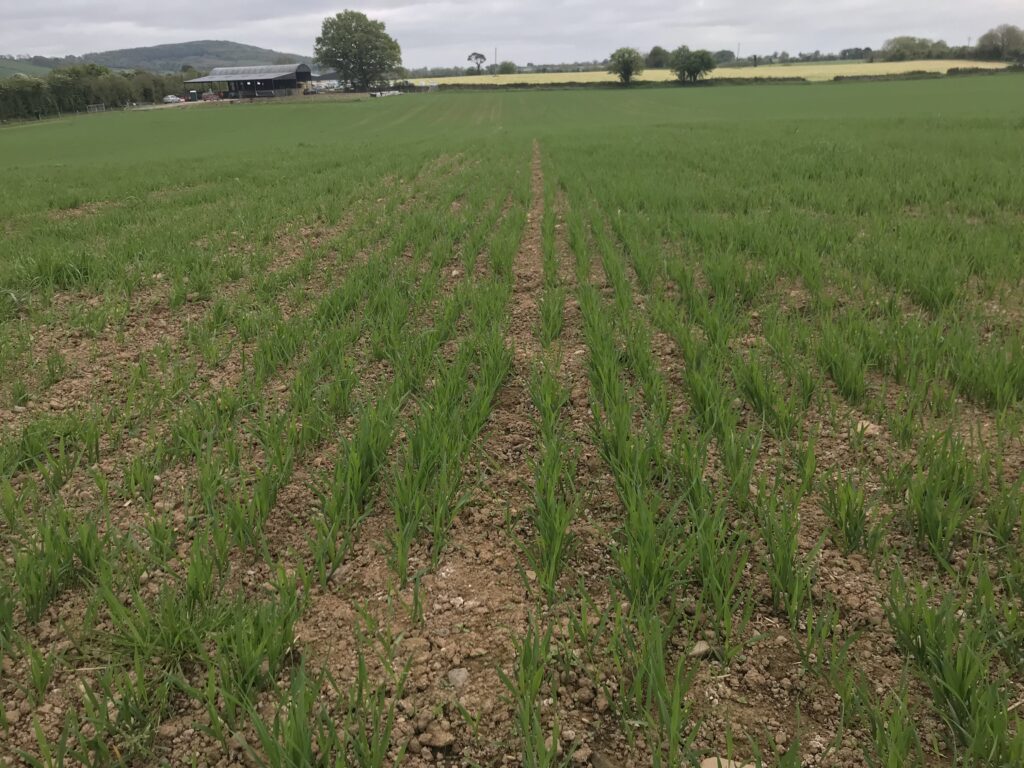 A tine cultivator was used to suppress weeds

“I have red clover and white clover sown in two different areas just to see the difference. Is it going to help to increase the yield? Will it be there when I harvest it and when I put in the cover crop?”

Apart from having an impact on yield, weeds can make harvesting the crop particularly difficult. 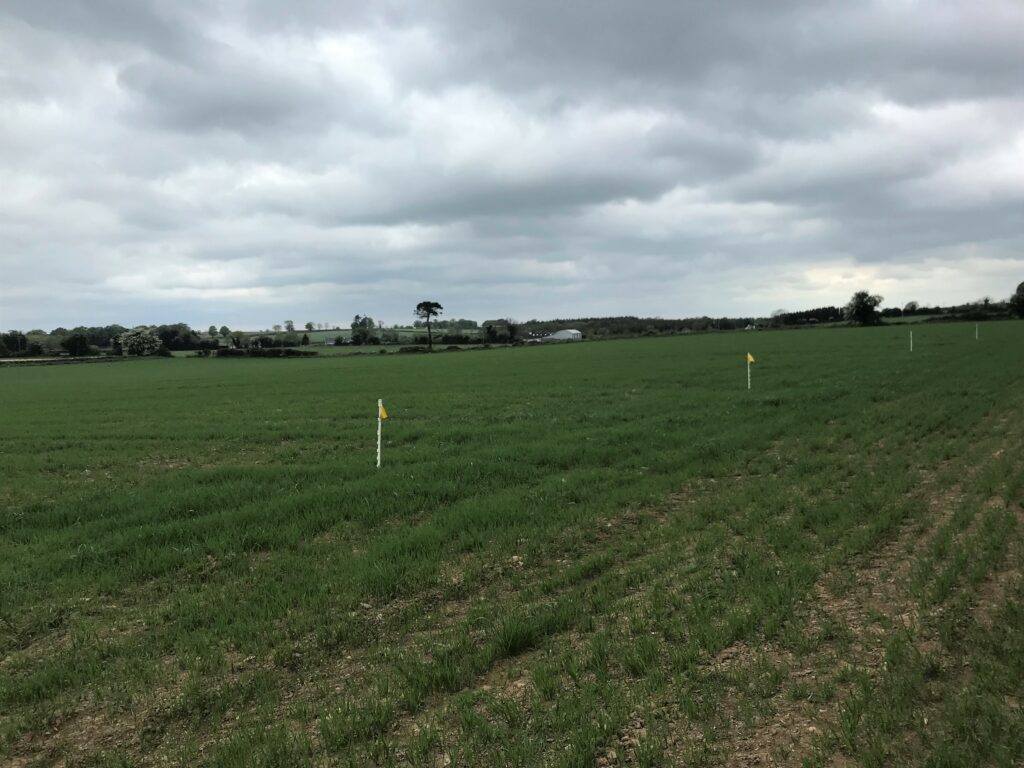 Organic oats are a valuable crop. They are transported to Flahavan’s in Co. Waterford to produce organic porridge and at present the demand for the product is outstripping supply.

Last year, Flahavan’s paid a base price of €380/t for organic oats. The supplier provides their own transport to Kilmacthomas.

In 2018, drought hit crops hard across the country and saw yields plummet in many spring crops. However, yields on last year’s oat crop were not affected dramatically.

Ross and Amy are hoping for a yield of 2t/ac this year. Ross noted that on higher fertility soils like his brother’s – which came out of permanent pasture – it is possible to reach 3t/ac. 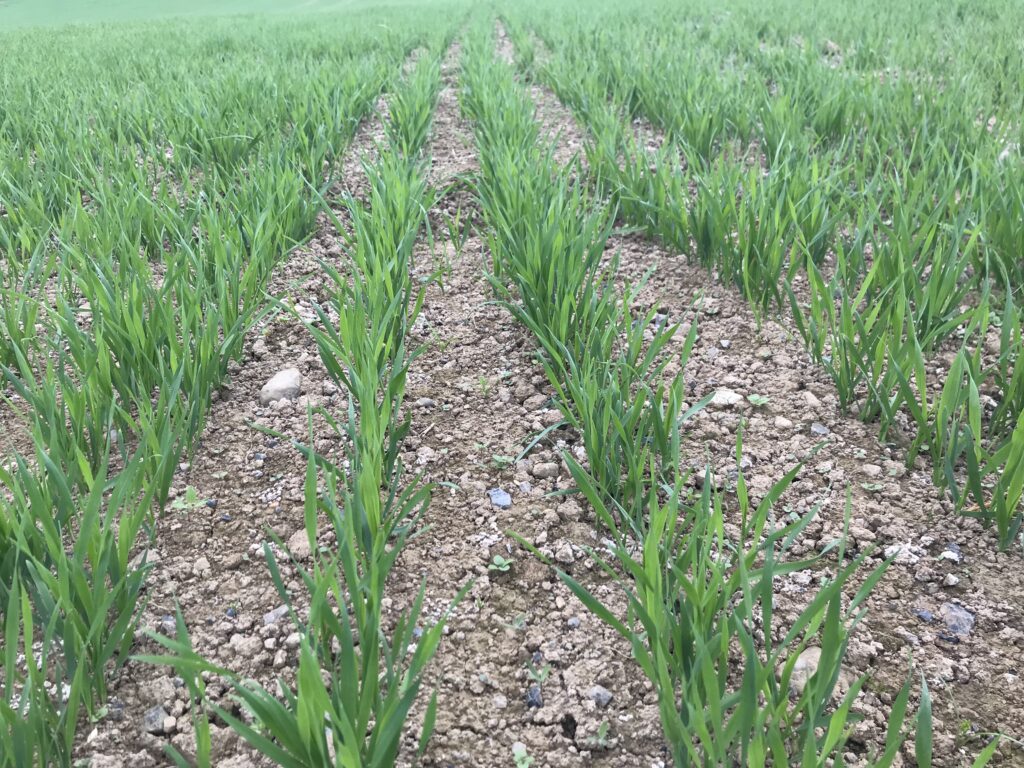 Organic oats on the Jacksons’ farm

The Jacksons also grow malting barley for Boortmalt and Waterford Distillery. They form a batch – 100t – of barley with Alan (Ross’s brother).

Waterford Distillery keeps barley from about 70 different farms individually and makes unique batches of whiskey from each farm.

“Our barley is kept separate from everyone else’s barley and then they distill it and decipher the different tastes between the barley coming from our farm and everyone else’s farms. 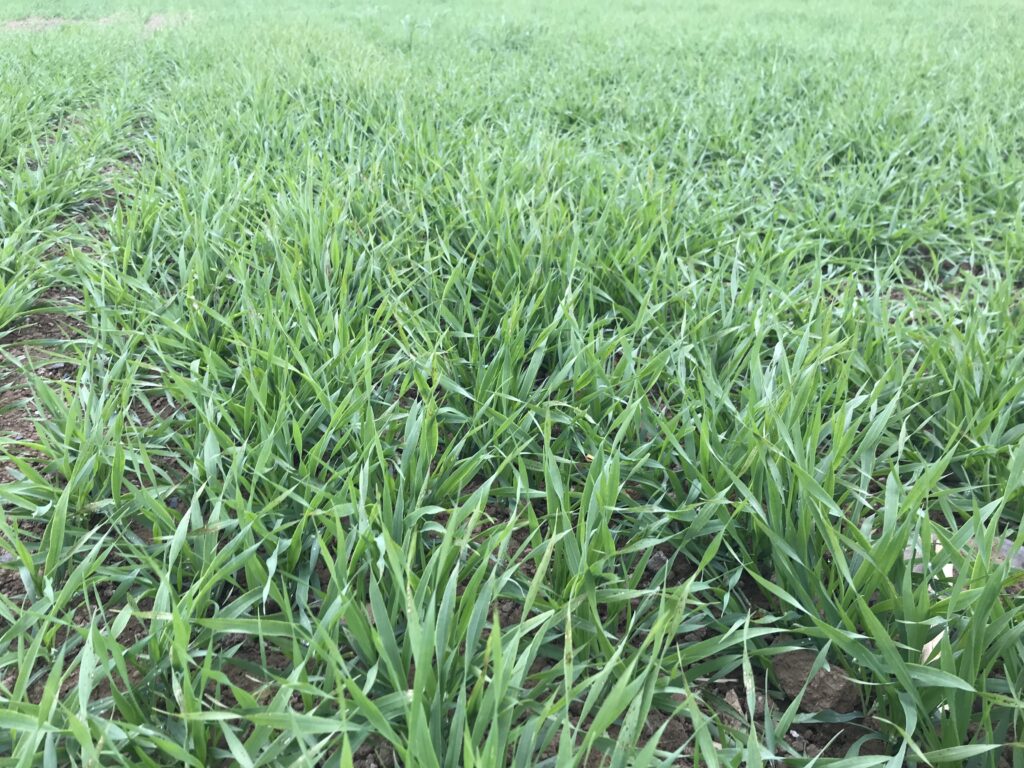 The spring barley crop was flying on May 8

“Alan’s first batch of whiskey will probably be ready next year, so it will be interesting because if you taste any other whiskey it’s all going to taste exactly the same, but with Waterford Distillery every batch is going to taste different and that’s the whole aim.

The idea is you could be sitting in a bar in New York, buy a bottle of whiskey for $100-150 and you’ll be able to scan the bottle.

Once you scan the bottle Ross explained that you will see a video of the farm, the background story of the production process and the location of the farm the whiskey came from.

Last year, the Jacksons were paid a base price of €500/t for their malting barley and the crop averaged 1.5-1.7t/ac. 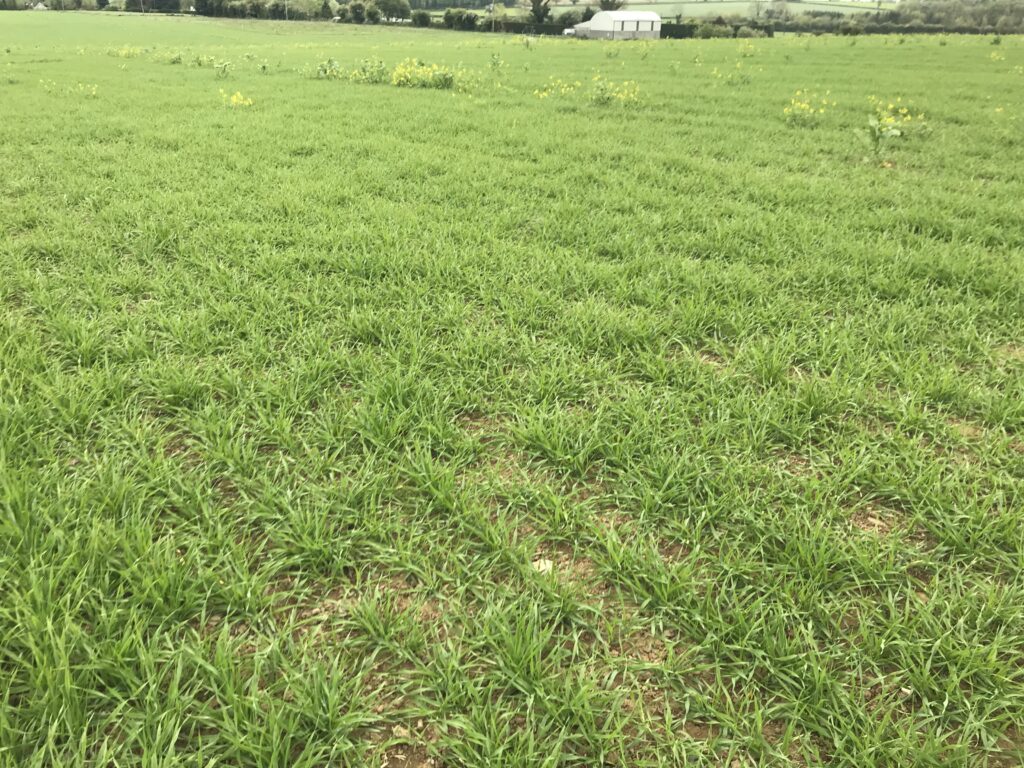 Volunteer rape could be seen in the spring barley

As mentioned above, crop rotation is an essential part of an organic farming system for weed control and to build up soil fertility.

For the first two years of the conversion everything was classified as conventional. In those years much of the farm was in grass and red clover.

“This was in red clover for three years to try and build fertility.”

Ross explained that he was worried about tillage weeds. Rotation was going to be a major tool in combating this.

Ross outlined some of the details of his rotation. 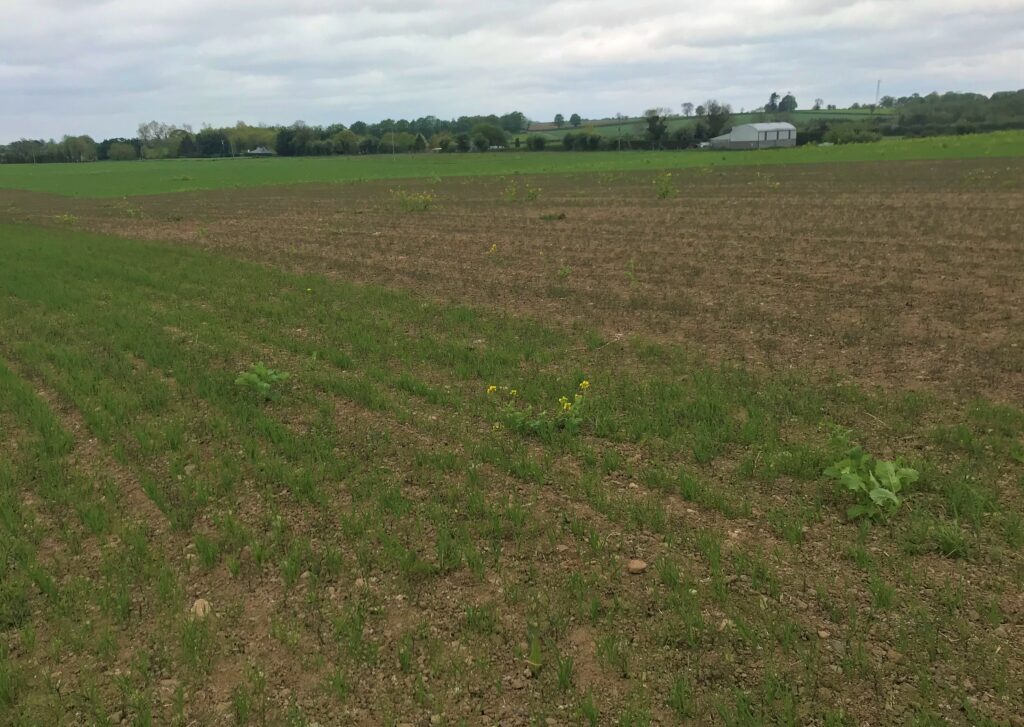 Slurry and farmyard manure are also important in the build up of soil fertility. Ross’s father is a conventional farmer and he can import these products from his father’s farm.

“I’m in a good position that my father is conventional and I can import his dung and slurry. That’s a massive advantage that we have because you won’t grow a crop without Ps or Ks no matter what you do.

We’re trying to get as much slurry and farmyard manure on the tillage fields as possible.

Products such as slurry can be imported from what are known as free-range systems. For example, cattle slurry and dairy sludge are allowed, but pig slurry is not.

Teagasc advisor Elaine Leavy complimented the Jacksons forward planning: “In organics you have to plan ahead. You have to have a rotation. Ross has worked out a rotation for the next five years. He knows it may change and you have to be willing to change.

“You have to look at the fertility of your soil and plan your crops accordingly. Crop rotation is one of the fundamentals in organics.”

As mentioned earlier, the Jacksons sow forage crops over winter. However, this year they are also experimenting with a new crop. 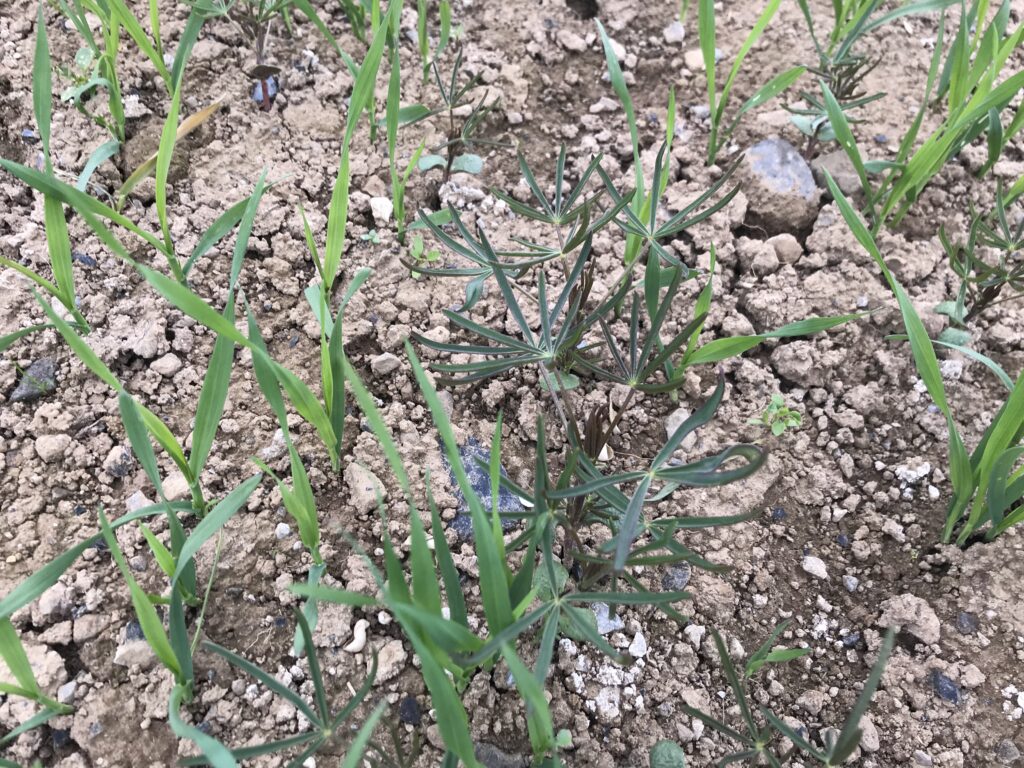 Oats and blue lupins on the Jacksons’ farm

Blue lupins and a companion crop of blue lupins and oats have been planted. Ross and Amy hope to harvest and process the lupins to feed to the sheep flock which Amy manages.

The lupins are high in good-quality protein and will also fix nitrogen and provide more ground cover when planted with the oats.

Ross added that difficulties can arise at harvest as lupins are often late ripening. However, they will be cut and baled if conditions aren’t suitable at harvest time.