The proposed 5% reduction to the Common Agricultural Policy (CAP) budget is a “very fair outcome” for farmers, EU Commissioner for Agriculture and Rural Development Phil Hogan has stated.

The statement follows the publication of the European Commission’s proposals for the EU’s multi-annual financial framework (MFF) budget for 2021 to 2017 – set at €1.279 trillion. This translates into 1.11% of the EU27’s Gross National Income (GNI).

The CAP budget is being reduced by 5% under the proposals; while direct payments are to be reduced by no more than 4%.

The reduction comes on the back of a €12 billion annual EU budget deficit caused by Brexit and a renewed member state prioritisation on security, defence and migration.

CAP represents almost 40% of the EU budget – or some €59 billion each year. One of the biggest criticisms of the EU’s flagship policy is that 80% of CAP funds go to 20% of farms.

Commissioner Hogan said the final outcome of the EU budget proposals maintains a strong, well-funded CAP – and a fair deal for European farmers and rural areas.

“Today’s budget brings clarity to the question that millions of farmers throughout Europe have been asking for several months: What impact will Brexit have on the EU budget and, especially, CAP post-2020?

We have the answer: The CAP budget is being cut by less than 5%. I regard this as a very fair outcome for our farmers, given the very challenging circumstances in which the budget has been framed.

“Moreover, it vindicates the argument I have been making – that the CAP needs to be adequately funded to support farmers and the wider agri-food sector,” he said.

After travelling throughout Europe in recent months, the commissioner said he has heard a strong and consistent message from farmers and farm leaders – as well as rural community leaders and politicians – emphasising the vital importance of direct payments as essential income support.

“I have listened very carefully to these messages and have therefore decided to prioritise the protection of direct payments in the new budget. As a result, direct payments will not fall by more than 4% in any member state.

In fact, the proportion of the overall CAP budget accounted for by direct payments will increase slightly to around 72% of the budget in the next EU budget.

The EU Commission is proposing a cap on payments at €60,000 per farmer.

“The savings generated from this capping can be redistributed to smaller farmers, who are the heartbeat of rural Europe.

“Rural development is also a very important part of the CAP. Reflecting that rural development is a shared endeavour, co-funded by the EU and national governments, our proposal is to achieve savings at EU level by asking member states to increase their contribution.

“This will allow public support to rural development to remain largely unchanged,” he said.

The commissioner stated that the proposed budget was prepared on the basis that there would be no increase in member states’ contributions to the EU budget.

However, he stressed that member states can still decide to contribute more – adding that both himself and EU Budget Commissioner Gunther Oettinger are calling on them to do so.

“A number of EU leaders have supported this call and it could yet well be the case that the European Council will agree to increase the size of the budget – with potentially positive consequences for the CAP budget.

This budget has been about choices, and the European Commission has chosen to maintain a strong and well-funded CAP.

“We have also chosen to prioritise the protection of direct payments, recognising their vital contribution to farm incomes and – through capping – we have chosen to focus on small and medium-sized farmers.

“In the coming weeks, the commission will publish its legislative proposals for the next CAP, which will include a specific set of measures to support young farmers.” 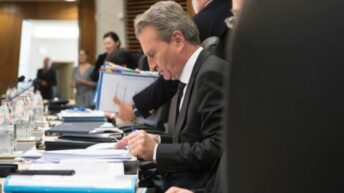