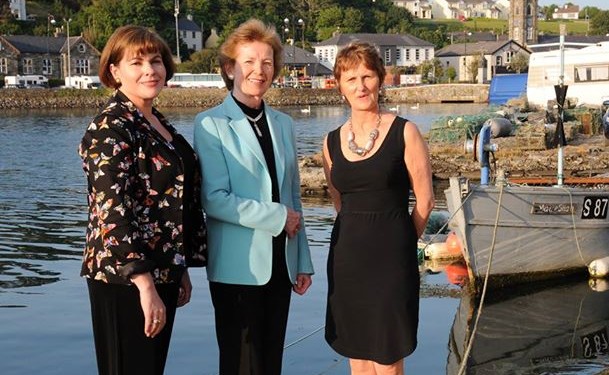 AgriLand caught with former Irish president Mary Robinson at this year’s West Cork Literary Festival where she spoke on dangers and affects of climate change.

“Ireland has huge potential for wave energy and it should set its sights on what Scotland does to develop this energy source further.”

These were the wise words of former president Mary Robinson, who spoke at the recent West Cork Literary Festival.

“We need to look at wind, solar and wave energy more. There is huge potential here. Climate change is an issue very close to my heart. In fact it is very much a human rights issue. It is something our kids, our grandkids and kids’ grandkids will be very much affected by.”

What seemed like the whole of Bantry packed the Maritime Hotel last Friday evening for an evening with the former president, who was there to promote her autobiography Everything Matters.

Mostly women of a certain age, the age where they backed their woman to the highest office of the land in the early Nineties.

Many listened in awe as Bantry-born journalist Alison O’Connor interviewed the first female president of Ireland, on the highs and lows of her life, childhood stories, her lifelong lovestory with Nicholas Robinson, her rage against the Catholic machine and her persistent achievements in human, women and now climate rights.

Robinson currently divides her time 50-50 between her Climate Justice foundation and Nelson Mandela’s The Elders Organisation. “As Brid Rosney, my press officer for my presidential campaign has a lovely phrase which is, I spend my time 75-75 per cent on both,” she laughed.

On a serious note, she warned that average temperatures are set to rise four degrees above pre-industrial norms, which would be catastrophic for the climate. She compared coal in the ground to asbestos. “Leave it where it is and don’t touch it,” she firmly stated.

The former president also spoke of her “comfortable” childhood in Mayo.”I was very lucky in the encouragement my parents gave me, and the opportunities they gave me, especially in my education.”

“Ireland was authoritarian when I was growing up, particularly in the way it treated women. The doctrine of Jesus Christ is the strongest moral code I know, but I think the country had drifted far away from that.”

She studied law at Trinity College and later did her masters at Harvard Law School. Her experience of the Civil Rights movement in America inspired her to seek election to the Seanad. “It was a great idealistic time where I saw that young people were making a stand and making change. It was very inspiring.”

At the Seanad, she controversially campaigned for the legalisation of contraception. “Archbishop McQuaid condemned me as a ‘curse upon the country’,” she said. “I was just 26 at the time.” She described this time a as a very lonely time, but that she learnt a strong lesson that it takes time to change cultural ideologies.

She said she was shocked at being asked to run for president. “On the 14th of Feb, 1990, attorney general John Rogers rang and asked to meet me. He called around to my home and told me the Labour Party wanted to challenge the presidency and asked me would I put my named forward. At first, I was astonished. But after thinking about it and discussing it with Nick, and realising how much the elected president of Ireland can do, I agreed.”

She also spoke honestly of her near emotional breakdown when appointed as UN High Commissioner on Human Rights, to stress perhaps that she is very much human. “It was such a busy time and I had to take  that Christmas to rest.”

One of the highlights of her career was meeting Nelson Mandela. She spoke warmly and honestly. “He is a strong voice, relentless and fearless. He has the strength of moral authority and he is everything people think he is, everything people hope and wish for him to be. ”He also has no sense of protocol at all,” she beamed.

Robinson, astutely aware that the Protection of Human Life in Pregnancy Bill was passed in the Dail the previous day, declined to take questions on the current political landscape despite intrigue by the Irish Times journalist.

What was evident during the course of the evening was the former president’s calm conviction and her modest pride in the pursuit of a fairer world.

Afterwards starlings of all ages lined the room for an hour or so to claim an autograph. This journalist shook her hand and left feeling fresh like the green grass of nearby Glengarrish.