David Berry, commercial director at Kantar Worldpanel, explained: “Bringing 24 Superquinn stores under the SuperValu banner has enhanced the retailer’s position as a major player in the grocery market. SuperValu now accounts for 25.3 per cent of Irish shoppers’ grocery market spend, just 1.1 percentage points behind Tesco. Its sales have remained broadly in line with the market, which shows that it has been able to retain its market share while acquiring assets. Now, the main challenge for SuperValu is to convince previously loyal Superquinn shoppers of the merits of the SuperValu brand, and ultimately hold onto their custom.

“Despite the overall grocery market declining for the fifth successive month, Aldi and Lidl continue to impress. Both retailers are delivering double digit sales growth, and have increased their market shares by 1.4 and 0.8 percentage points respectively. Over the past three years Aldi and Lidl have captured a combined 3.8 share points from the competition, and have grown sales by 37 per cent in an overall grocery market which has grown by just one per cent. Conversely, Tesco and Dunnes have both experienced declines in market share and actual sales as the result of the pressure exerted by the increasingly competitive market place.”

February saw the grocery market’s weakest performance since September 2011, with sales declining by 0.6 per cent. Falling inflation has played a significant part in this as vegetables and bread, two important staple items, are now cheaper than they were last year. 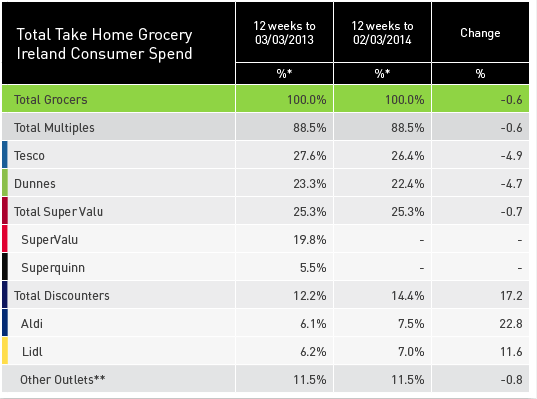