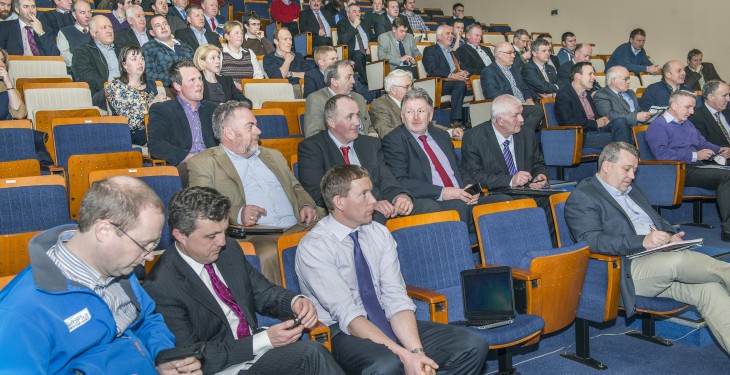 A section of the crowd at a Teagasc Dairy Expansion Seminar - O'Gorman Photography.

At the Teagasc Dairy Expansion seminar recently Brendan Horan, research officer at Moorepark, outlined that there are lots of positives in the dairy industry today, however, there was a clear word of warning.

“It is still only the top 10 per cent of dairy farmers that are in a position to invest in their production in terms of large-scale expansion,” he said. “Whether the average dairy farmer should or not is very questionable. Particularly if it requires debt.”

Horan was addressing the seminar on the topic of resilient dairy systems.

“In terms of resilience this means a system that is profitable, that can deal with a crisis and can return to normal after a crisis.”

He advised that “all expanding dairy farm businesses must be ‘resilient’ so as to insulate the business from milk price and climate instability and consistently meet profitability expectations”.

Horan highlighted: “that while the top 10 per cent of established dairy farms are highly profitable, that milk price volatility is challenging the profit levels of the average dairy farmer.”

He outlined: “An examination of the performance of the top 10 per cent of farms emphasises that they are achieving high levels of grass utilisation, have low interest and depreciation costs, are carrying higher stocking rates and achieving higher animal performance.”

He continued: “For the average farmer, in an average year, the farmer’s own labour is paid out of his or her dairy farm system. But there is little enough extra profitability beyond that labour charge.

“There is huge ambition around expansion, which is a fantastic thing. There will be expansion on most dairy farms simple due to the removal of quota and a lengthening of the lactation. A natural type expansion.”

In terms of profitability of the range of Irish dairy systems, the Teagasc expert said: “Research has shown there is no addition of profitability by moving into higher supplementation systems. With the risk of the business increased.

“Higher input systems need to reward the farmer more for he increased risk the farmer has taken on.”

Horan explained: “Extra milk production has to come from grazed grass or profitability will be quite small. Research has shown as grass utilisation increases net margin increases.”

On scale he noted: “The larger the scale the more complicated the business is to run. It requires a greater skillset in farm management. From the data today that tends to compromise profitability.”

In conclusion he said: “Let’s not just put all the emphasis on scale as the opportunity to improve profitability. It will often challenge profitability getting into these larger-farm businesses.”

Pictured is a section of the crowd at a Teagasc Dairy Expansion Seminar Series on ‘Benchmarking Expansion on Irish Dairy Farms at the Horse & Jockey, Co Tipperary. Photo O’Gorman Photography