SuperValu remains Ireland’s largest grocer, with the biggest share of the grocery market, according to the latest figures from Kantar Worldpanel Ireland, published yesterday.

Kantar Worldpanel Ireland reported that, of the top five major grocers, SuperValu was the only one to have attracted more shoppers through its doors, with an additional 8,000 customers visiting the supermarket in the past 12 weeks compared to the same period the year before.

Dunnes Stores sits in second position, with 22.1% of market share. However, the store showed the strongest growth of all the major retailers with sales increasing by an impressive 5.1% since last year.

Dunnes shoppers spend just under €40 per trip – almost €17 more than the average for the grocery market, according to Kantar Worldpanel Ireland. This helps to explain the brand’s significant rise in sales.

Meanwhile, Lidl and Aldi remained steady, taking 11.3% and 11% of the market respectively.

The market as a whole saw limited growth at just 2.3%, with price deflation of 0.3% keeping a lid on supermarket revenues.

David Berry, Director at Kantar Worldpanel, said: “In recent years we have seen a definite shift away from promotional deals towards more consistent, lower prices on everyday items.

“Just over a quarter of all goods are now bought on promotion – down from 33% in 2014. With the rate of deflation in the grocery market falling even further, we expect to see this trend stick around.”

It was also reported that Irish shoppers indulged over the Easter period. Sales of Easter eggs rose by 9% and fresh lamb by 10%.

With three quarters of the population treating themselves to at least one Easter egg, this meant a €3m boost to the market. 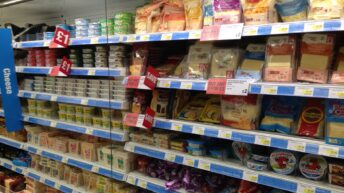