Subsidies accounted for 59.3% of agricultural income in 2018

Net subsidies accounted for 59.3% of agricultural income (operating surplus) across the state in 2018, with the midland region seeing the highest figure, at 103.2%.

According to statistics released by the Central Statistics Office (CSO), the west region saw the second-highest proportion of income coming from net subsidies, at 87.9%.

The south-west region saw the lowest net subsidy to income ration, at 43.7%, while in the Dublin and mid-east region it was 45.6%.

The table below illustrates the national and regional situation for the year 2018. 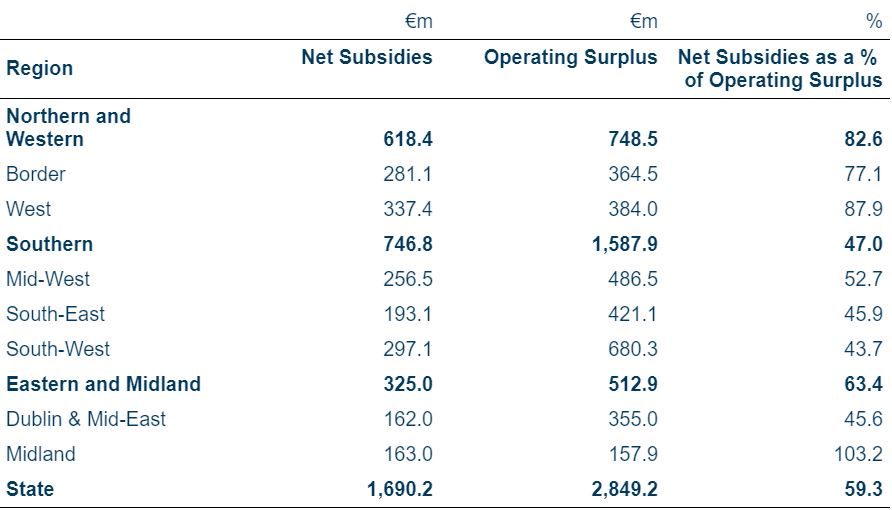 If regions are grouped into larger areas, it can be seen that the north and west regions combined saw 82.6% of incomes coming from net subsidies. This figure was 63.4% in the east and midland area, and 47% in the south.

In the data released today, Thursday, October 3, by the CSO, other statistics relating to agricultural output and operating surplus are also presented.

It was found that the south-west and mid-west regions made the largest contributions of all regions to agricultural output, accounting for 21.1% and 17% respectively of the national total. The lowest contribution was made by the west region, which produced 9.6% of the total.

Other key figures include:

In terms of costs, intermediate consumption expenses increased by 13% between 2017 and 2018, with the mid-west and west regions being hit with the largest increases – 16.6% and 16.4% respectively.

This data and other related statistics can be viewed on the CSO website.

Gardaí pull over tractor for unsecured load of bales