Agricultural output prices have fallen while input prices have risen in July 2018, the latest figures from the Central Statistics Office (CSO) have revealed.

The agricultural input price index increased by 0.3% over the same period.

The resulting terms of trade index decreased by 1.1% in July 2018, according to the CSO. 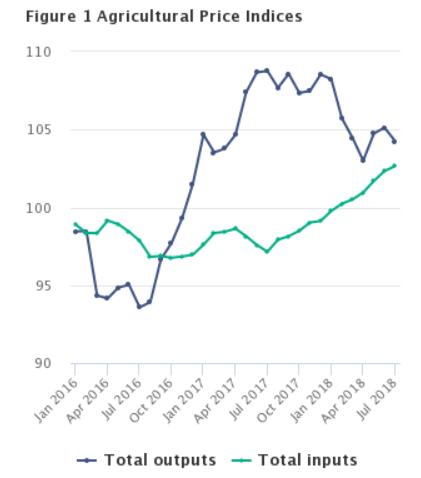 Advertisement
The agricultural output price index decreased by 4.1% in July 2018 compared with July 2017.

Cereal output was more positive from a price index perspective. Cereals saw an increase of 5% – but the potato index skyrocketed by 125.4%.

On the input side, the largest increases were in energy and feeding stuffs which were up 14.9% and 7.3% respectively on July 2017 prices.

Motor fuels rose by  18% over the same time-frame, while fertilisers collectively saw a jump in index of 7.1%.