The total spring lamb throughput to date at sheep export meat plants is up by 9% year-on-year, figures from the Department of Agriculture show.

According to the figures, the weekly spring lamb kill has increased for the week ending September 13. The weekly throughput is up by approximately 6% or 3,003 head, which brings last weeks kill to 57,507.

These figures also show that there has been a reduction in the number of hoggets (2014 lambs) coming forward to plants. The total hogget kill is down 5%, while the weekly kill has fallen by 1,595 head.

There has also been huge reductions in cull slaughterings, both across ewes and rams with this kill falling by 14% from 2014, with almost 33,000 less of these animals making their way to sheep export plants, says the Department.

The weekly cull kill has also dropped, it is down 22% for the week ending September 13, with 2,296 less of these animals coming forward for slaughter.

According to Bord Bia, the sheep trade strengthened this week on the back of tightening supplies and increased trade across the key export markets as a result of the Muslim festival of Eid al-Adha.

In Britain, supplies were up by 33% on the previous bank holiday week and were almost 50% higher than the same week in 2014, says Bord Bia.

The SQQ live price for lamb in England and Wales was making the equivalent of around €4.43/kg deadweight towards the end of the week.

In France, the trade remain steady throughout the week as Grade 1 Irish lamb was making €4.74/kg (DW incl VAT) towards the end of the week, it says.

Sheepmeat imports to EU up 1% year-on-year

Despite this increase, it was still 1% below the high level of imports in the first half of 2013, it said.

The majority of the increase came from New Zealand, AHDB said while volumes coming from almost all other countries actually declined.

Shipments from New Zealand were up by 6% on the year, despite a decline in production in New Zealand in the same period.

With the volume of Kiwi sheepmeat going to China declining sharply in the first half of the year, this has resulted in more product available for export to other countries, it said. 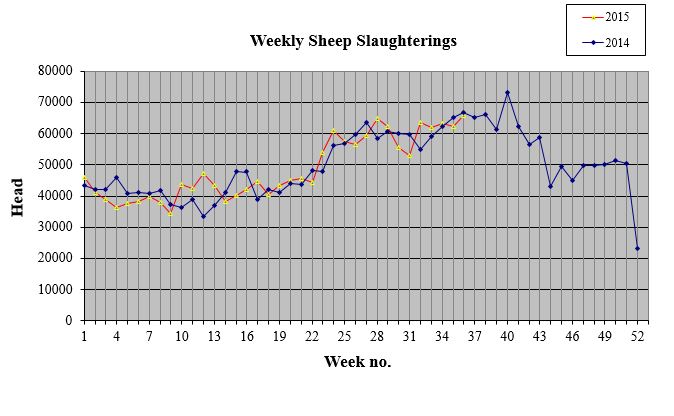 Sheepmeat imports to EU up 1% year-on-year, here's where it came from