According to Met Éireann, the south-east of the country is continuing to see soil moisture deficits (SMDs) exceeding 91mm, figures released on July 26 show. 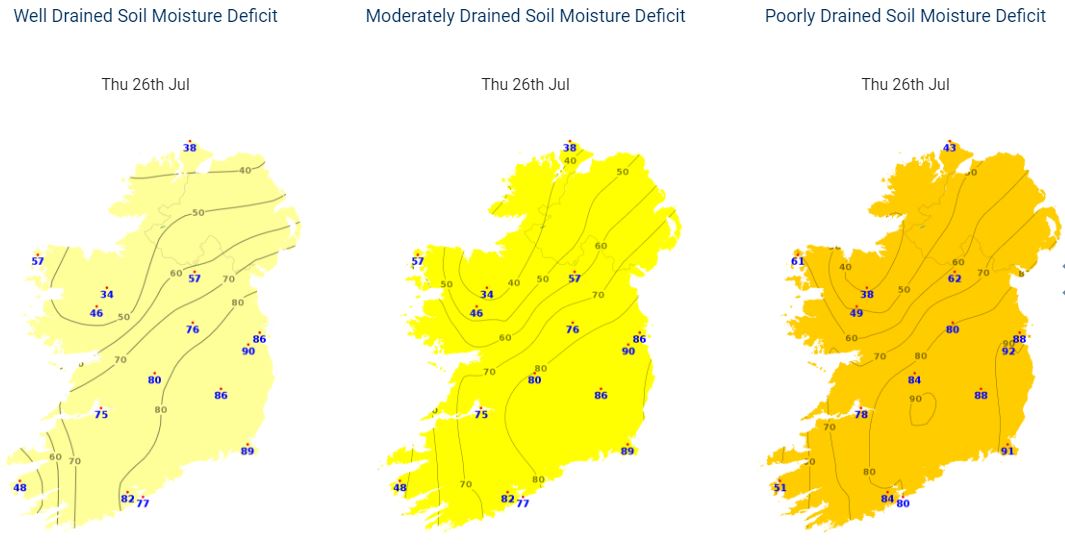 SMDs are currently in excess of 76mm over many parts of Leinster and Munster, with drought conditions in place.

Readings as high as 91mm have been seen on poorly-drained soils in the south-east, having decreased slightly from 92mm in figures released on July 17.

Advertisement
Also Read: Up to 98mm of rain needed to bring soil moisture deficits back to zero

In comparison, 43mm or rain is needed in Co. Donegal on poorly-drained soils, while 38mm is needed for well-drained soils. A reduction of almost 8mm in the last 10 days.

Forecast rainfall this coming week is expected to reduce SMDs in all areas, though Met Éireann forecasts soil moisture deficits to remain high in parts of Leinster and Munster.

A status yellow rainfall warning for Leinster, Cavan, Monaghan, Donegal and Waterford has been issued by Met Éireann.

Issued by the national meteorological office this morning (Friday, July 27) at 11:00am, the warning will be valid from 9:00pm tonight until 9:00am tomorrow morning (Saturday, July 28).

Thundery downpours in places may lead to rainfall accumulations of 25-40mm, according to Met Eireann.

A marked change to a more mobile Atlantic regime in the coming days will see several frontal systems affecting the country at times, according to Met Éireann. This will result in rainfall amounts being near or above normal in most parts of the country over the coming week.

Rain on the way as showers move in from the west