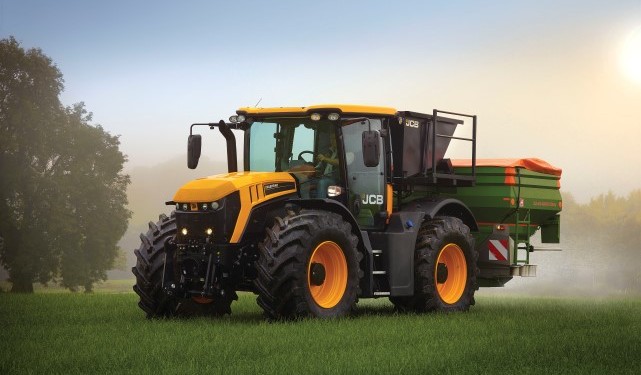 JCB is previewing  its new 4000 Series Fastrac at Agritechnica today. It is 23 years since the Fastrac was launched on the market, JCB says today’s preview is one of the most significant developments for the Fastrac since then.

JCB says the new-look machine will be launched next year and will replace the current 2000 Series. JCB claim there are improvements in all areas including design, performance and driver comfort and convenience.

The Fastrac 2000 series currently on the market has been updated over the years since the first Fastrac was released. JCB say the Fastrac 4000 will stay true to the original concept but steps up the performance potential with new engines giving outputs up to 220hp; a continuously variable transmission; more powerful hydraulics; and an even tighter turning circle with Quadtronic four-wheel steering that is unmatched by a conventional tractor of this size and power.

JCB also claims there have been major advances in suspension specification and control to add to the tractor’s high speed field and road performance will also be evident when the tractor is launched.

It says compared with conventional tractors, the new Fastrac 4000 will be capable of working at faster speeds in the field due to its smooth-riding axle suspension front and rear. It says users will also be able to exploit the front linkage and generous mounting area behind the cab to gain capacity and increased productivity for spraying and fertiliser spreading.

On today’s preview JCB Agriculture managing director, Richard Fox-Marrs said: “The Fastrac 2000 Series has served well as a tractor with a unique combination of features for grassland and arable top work, and for high speed spraying and spreading. For the past two years, our engineers have been working on its replacement – and working hard to deliver all-round improvements.

“I’m pleased to say they have achieved their goal: when it comes to the market in 2014, the new Fastrac 4000 Series will be more powerful but more economical, stronger but more nimble, and more versatile yet easier to operate. It will also give the driver unrivalled visibility in all directions.”

Fox-Marrs added: “The icing on the cake is an operator’s cab that few tractors of this size can match for roominess and, especially, for all-round visibility. Full-length glazed doors and front pillars set wide apart, and looking out over a tapered engine hood, give much improved visibility forwards and to both sides.

“Our designers have also paid particular attention to rearward and rear three-quarter visibility. In addition to regular field machinery for grassland and arable work, the new Fastrac 4000 will be a great tractor for operating a hedge cutter and other offset implements, including highways maintenance equipment, thanks to its unique combination of power, stability, speed and control.”

Full specification details will be announced once finalised ahead of the tractor’s commercial launch in 2014.