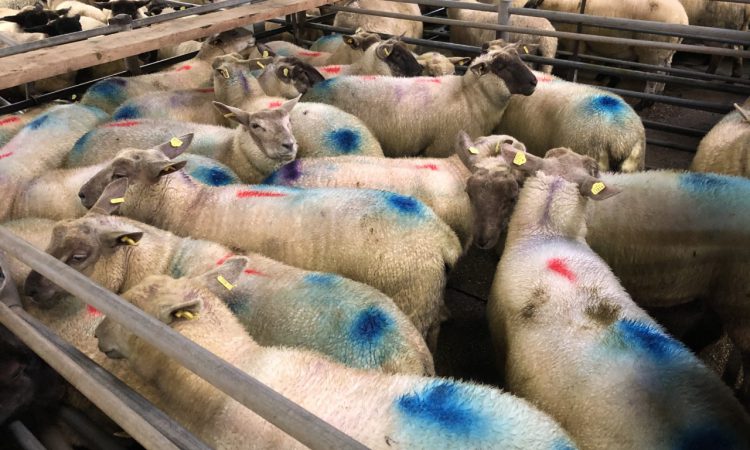 Speaking to mart managers over the past week, some say that the trade for finished lambs is stronger by €1-2/head, while others say it’s weaker by €3-4/head.

Factory-finished lambs traded from as low as €92/head up to €110/head, with select lots again breaking past this and making up to €115/head; however, prices as high as this were few and far between.

Store lambs remain a solid trade and prices for these lots ranged from €60/head for plain, light store lambs up to €92/head for more forward-type stores.

Cast ewes were an easier trade according to many mart managers last week. Prices for heavy, well-fleshed ewes topped out at €130/head, with the majority selling for €105-120/head.

He noted a stronger trade for finished lambs. On the day, factory lambs made from €98/head up to a top call of €121.50/head for butcher lambs.

Terry also said that stores were a slighter better trade as well. Forward-type stores sold from €80/head up to €95/head, while lighter stores traded from €60/head up to €80/head.

Cull ewes were a solid trade and prices for these lots ranged from €80/head for feeding ewes up to a top price of €129/head for well-fleshed ewes.

He noted that factory buyers and butchers were eager for suitable lambs, as at the moment, finished lambs aren’t overly plentiful.

Store lambs continue to “sell very well and every week there are plenty of buyers for stores”. Kevin said that like the finished lambs, more of the stores have been moved earlier in the season than in previous years, which might make stores increasingly scarce as the year goes on.

Kevin noted that heavy cast ewes remain very scarce and have been a weaker trade for the last two weeks. Prices for heavy cull ewes ranged from €105/head up to a tops of €127/head.

There was a big entry of store ewes on offer last week. Kevin added that store cull ewes haven’t seen the same drop as their heavier counterparts, as some farmers are opting to buy store cull ewes instead of store lambs. Prices for these lots ranged from €69/head up to €94/head.