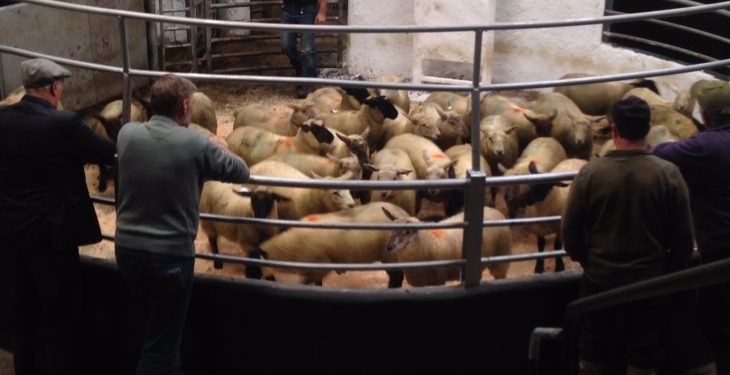 Store lambs met a strong trade in Mountbellew Mart on Saturday, according to the Mart Manager Shirley Keating, with prices ranging from €75-92.50/head.

The Mart Manager said that lambs met a similar trade to the sale held a week earlier, with factory lambs ranging from €2.03-2.10/kg.

Keating also said that cast and breeding stock met with a brisker trade than the previous week, as there was an increased number of buyers present around the ring.

There was a big entry of sheep in Carnew Mart on Thursday with over 5,100 passing through the ring, according to the Mart Manager David Quinn.

But, he said store lamb prices were a little easier compared to the week before, with most lots back by €2-3/head.

The Mart Manager also said that demand remained strong for cast ewes, with heavy lots trading from €90-112 each, while the lighter feeder type ewes sold from €45-75 each.

Breeding ewes met a similar trade to last week, he said, with the best of the hoggets selling to a top price of €165 and the older breeding ewes made €90-140 each.

Lambs met a good solid trade in Kilkenny Mart, Cillin Hill on Monday, according to the Mart Auctioneer George Candler.

However, Candler also said that breeding sheep, including both ewes and rams, remain difficult to sell due to a lack of customers as many farmers were busy in the tillage fields.

The Auctioneer said that cull ewes sold to a top price of €120/head, but breeding hoggets were more difficult to sell due to a lack of farmer activity and as a result these lots made from €130-192 each.