Factory and butcher lots are meeting a firm trade in the country’s sheep marts. This has occurred as the majority of processors are holding quotes at 460c/kg.

Fermoy mart has 1,000 sheep on offer on Monday, reported Mart Manager Sean Leahy. According to Leahy there was a very good trade for all classes of lamb.

Hogget ewes were also in demand at the north Cork venue with lots selling from €140-220/head, while the older second and third crop ewes made €120-160/head.

There was also a good selection of rams on offer and these lots sold from €250 to a tops of €640/head.

There was 1,100 sheep on offer in Kilkenny on Monday and the Auctioneer George Candler reported a bigger sale of sheep in the Southeast venue.

However, this bigger sale did not have a negative impact on price as the Kilkenny venue reported similar prices to last week.

Lamb price was a little sluggish in the Kilkenny venue when compared to the marts in Munster. Butcher type lambs sold from €1.93-2.04/kg, while the factory lots sold from €2.02-2.09/kg.

Store lambs met with a lively trade, he added, with higher €/kg prices achieved for these lots then the factory and butcher fit lots. The hammer fell for store lambs at €2.05-2.39/kg.

There was also a good trade in Cahir on Wednesday last, according to Mart Manager Jonathan O’Sullivan.

Cast ewes also remained in good demand with lots selling from €30-116/head, with the lower price being paid for feeder type mountain ewes.

There was also a selection of hogget ewes on offer and they sold from €140-210/head.

The light mountain type stores sold from €40-54/head, while the heavier mountain cross lambs made up to €60/head.

The hammer fell on the low-land type stores from €60-80/head, while the tops of the factory lambs made €105/head.

There was a smaller number of breeding hoggets on offer and these lots sold from €120-150/head for the lighter type lots to a tops of €178/head for better quality hogget ewes. 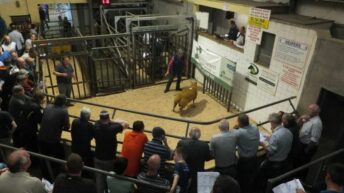