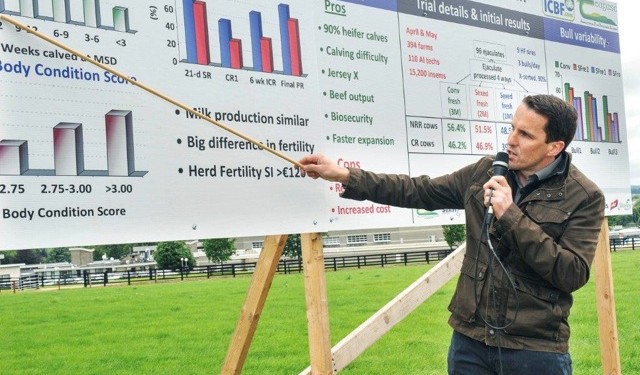 Is there a role for sexed semen in seasonal-calving systems? This was the question posted by Stephen Butler of Teagasc Moorepark at today’s Positive Farmers conference in Clonmel, Co Tipperary.

According to Butler: “The use of sexed semen in Irish dairy herds has the potential to improve profitability on Irish dairy farms and add significant value to the wider agri-food industry.”

The study was designed to verify the conception rates attainable when using sexed semen under Irish conditions and enable Teagasc to provide recommendations for the future use of sexed semen on Irish dairy farms.

Butler outlined that more than 15,000 inseminations were carried out on 392 farms as part of the trial, using conventional, fresh sexed and frozen-thawed sexed semen. A selection of 4,000 animals (cows and heifers) from the trial was scanned for pregnancy diagnosis earlier in the summer.

He commented that preliminary results so far indicate that frozen-thawed sexed semen has performed far better than expected, with a drop of only 7 per cent (49 per cent vs 42 per cent) in conception rates compared with conventional semen.

The excellent performance of the frozen-thawed sexed semen is particularly important, according to Butler, due to its beneficial implications for the potential future use of the technology in Irish dairy herds.

He also highlighted that frozen sexed semen will also provide greater opportunity for DIY AI farmers to utilise the technology.

Results from the trial on conception rates was also interesting. Butler said conception rates achieved with sexed semen are reduced compared with conventional semen. However he noted results were improved the longer the cows were after calving and the greater the animals body condition score.

Scenarios for its use

Butler noted the direct effect for the farmer of increased numbers of dairy heifer calves born in a herd using sexed semen is that he has options.

He outlined the results of research, which has shown that expansion is faster, more profitable when sexed semen is used. This is because sexed semen use generated greater numbers of replacement heifers. The faster herd expansion facilitated by sexed semen use thus resulted in greater levels of farm profitability.

Butler cited that for non-expanding herds, the use of sexed semen enables the number of replacement heifers required to maintain herd size to be produced from a smaller proportion of the herd. This will mean a farmer can use beef sires on the rest of the herd to increase revenues.

Butler also highlighted that sexed semen will also be beneficial in the rearing of replacement heifers. This is due to the heifer calves being closely grouped in terms of age, and should be easier to manage as one group to meet the optimal targets.

In addition Butler pointed out that the use of sexed semen may also reduce the incidence of calving difficulty (heifer calves are lighter than male calves), and improve biosecurity by allowing farmers to increase herd size while maintaining a closed herd.

He said that a document on best practise guidelines on the use of sexed semen is to be published in spring 2014.

Image:Stephen Butler speaking at the Teagasc open day in Moorepark in 2013