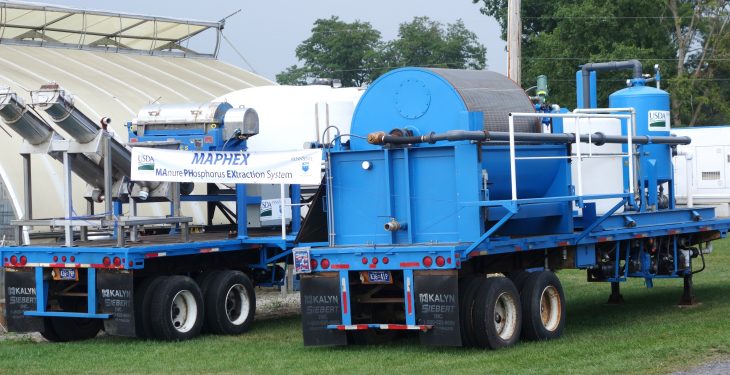 This system may offer farmers greater flexibility in terms of where, when, and how they use the nutrient to fertilise crops.

The idea behind the Manure Phosphorus Extraction System (MAPHEX) is to remove the phosphorus and concentrate it in a form that’s easier to manage, according to Clinton Church, an environmental chemist with USDA’s Agricultural Research Service (ARS).

“Hauling slurry off the farm to new locations where it can be spread isn’t always practical or economical,” he said.

However, transporting concentrated phosphorus from the new treatment method could offer a less costly alternative

Church is part of a team that has developed and tested MAPHEX as a way for farmers to not only ‘mine’ phosphorus from their manure stores but also market the nutrient as a value-added product.

To do this, the team mounted an auger press, centrifuge, vacuum-filter unit, and other components on top of two trailer beds so that the entire system could be driven to a farm and operated onsite. This allows the system’s use on either a daily or rotational basis depending, on the size of the dairy operation.

According to Church, the system can service 10 small farms on a 10-day rotational basis. On a larger farm, such as one with 2,000 cows, the system could operate over 24 hours. MAPHEX works quickly.

In about 10 minutes, for example, it can extract 99% of the phosphorus from 250 gallons of slurry. It also removes the smell from the manure.

Church added that testing for pig manures is planned for this coming winter and spring.

“The system should work equally well on pig slurries: with one caveat.

“Provided the pigs are fed the enzyme phytase in their feed mixture it should work equally well.

“However, the current chemistry used would not remove phytate, which contains significant quantities of phosphorous, from pig slurries. MAPHEX should also work more efficiently on pig slurries, in terms of the gallons treated per hour.”