Russia may look to Brazil to fill beef shortfall

With Russia recently announcing that they would be banning EU beef imports, it may be the case that Russia looks to Brazil, its biggest supplier, to fill this shortfall, even though it is only small in volume, according to EBLEX.

It says Brazilian international beef exports have been strong in the first half of the year. Hitting their highest first half-year position since 2007, volumes are up 14% on the year to almost 600,000 tonnes.

Last year, Brazil was the largest global exporter of chilled and frozen beef. It regained its position having lost it to Australia in 2008, showing that international trade continues to be of strategic importance for the domestic cattle sector. Therefore, developments in Brazil inevitably have the potential to impact on the global market.

EBLEX says that despite having gradually declined in significance since 2008, Russia remained the main export destination for Brazilian beef. However, shipments were 6% lower than in the first six months of last year. Since January Brazil has exported 143,300 tonnes of beef to Russia.

The EU has accounted for 8% of Russian beef imports in the first quarter of 2014. Shipments had been up 5% year on year, largely as a result of increased volumes from Poland and Germany. 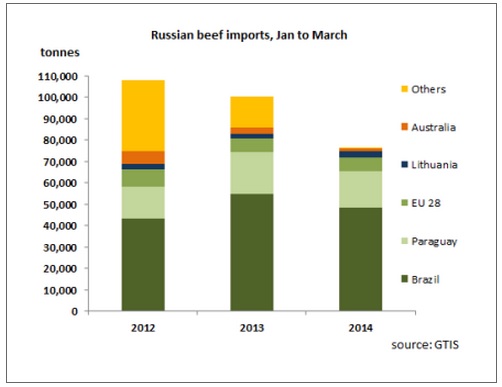 EBLEX also notes that although Brazilian producers are not currently major suppliers of beef to the UK and EU, the higher supplies from the region are satisfying increased demand in other parts of the world. This is helping to offset tight supplies from other major global exporters. Availability of Brazilian beef could also limit opportunities for EU exporters, meaning that more product is being retained on the EU market, possibly affecting prices to a small extent.

Market prospects for Brazil in the rest of 2014 indicate a further increase in both production and exports. This could well result in increasing exports to the EU as a whole, including to the UK, even though the number of EU-approved cattle farms is still well below the levels of 2007, when the EU imposed restrictions on trade from Brazil.