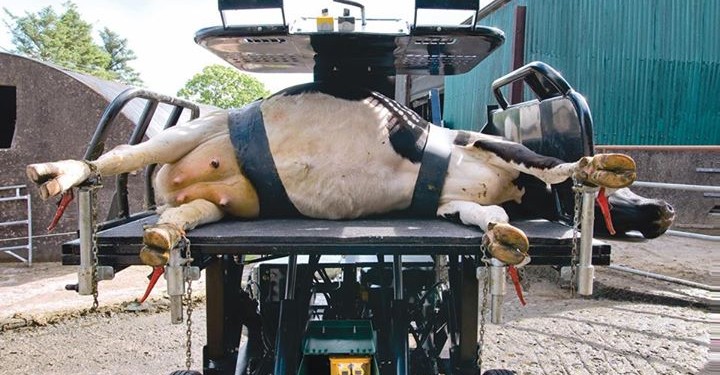 The interest from farmers in the award-winning Inspect 4 hydraulic hoof paring carte is unreal, according to its inventor East Cork woman Maeve O’Keeffe.

The device one the top prize in the Innovation awards at the Tullamore Show in August and just missed out on first prize at the National Ploughing Championships in September.

Speaking to AgriLand, 23-year-old O’Keeffe explained the device is simply a turnover hoof paring crate that takes the physical work out of paring.

“When I wanted to hoof cows on the dairy farm at home I didn’t like the methods being used. It was unsafe for the operator, as you could get a kick, and for the animal. So myself and my father invented a turnover crate.

“We thought the animals would go crazy. We started off with one unit and we tried the cows the first night and we were simply amazed that it worked so well and the cows didn’t go crazy at all. The cows were happy and didn’t go mad at all.”

The idea for the Inspect 4 hydraulic hoof paring carte came during a work experience period O’Keeffe spent on a 1,300 cow herd in New Zealand where she saw a crate for hoof care working very effectively. She felt a similar model would have big application in Ireland.

On farm demonstrations have been well attended and a mobile Inspect 4 hydraulic hoof paring carte service was launched this month.

“The product is very new and we are creating a huge amount of awareness with our live demonstrations,” O’Keeffe.

And east Cork woman hasn’t ruled out a showcase at the next year’s National Ploughing Championships. “We’d love to do that, maybe not just yet because of our budget, but definitely in the years ahead!”

Information on the inspect 4 crate can be found here.