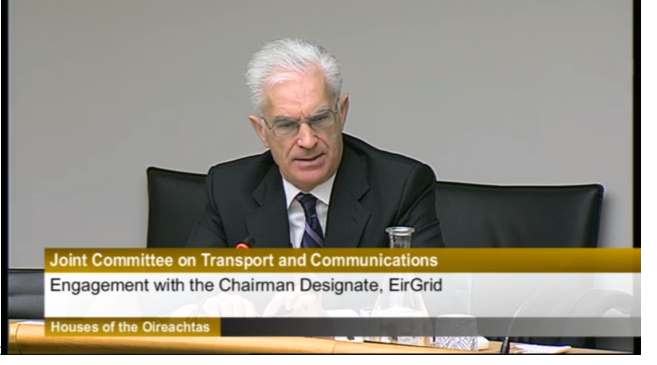 “I would like to refute emphatically the reported suggestions that I would have a conflict of interest in taking up this position.”

This was the opinion of the chairman designate of EirGrid, John O’Connor, who was before the Joint Committee on Transport and Communications today.

Chairman of the national planning authority for 11 years, he said:“My chairmanship of An Bord Pleanala ended in June 2011 and since that date I have no involvement with the board or indeed could I have. My standing with An Bord Pleanala is the same as any other citizen. There is no conflict between my personal interest and those of EirGrid arising out of my previous employment.”

According to O’Connor: “I will not involve myself in individual planning applications or attend oral hearings…As chairman of the company I don’t think I can step away from certain processes in the company. That wouldn’t be right either…I don’t believe I have any particularly unique knowledge of how An Bord Pleanala works.”

On the current controversy surrounding the roll out of the EirGrid Grid 25 project, he said: “I will ensure the company plans these projects in a an effective manner that minimises the affect on the visual environment and on natural and built heritage, and that gives the fullest assurance to people that the projects will not impact on their health or safety.”

He cited during his time in An Bord Pleanala he considered it essential that the same standard of rigour and planning and environmental assessments that apply to planning applications generally would apply and would be seen to apply to strategic infrastructure projects.

He also said: “I strongly subscribe to the view that meaningful public consultation with the public, property owners and communities is an indispensable element.”

Referring to the criticism of EirGrid’s public consultation to date he said: “I would be disappointed to think that people didn’t feel that they got a hearing. I think there is a quite extensive consultation procedure set out.

“Every issue that was raised will have to be dealt with. People shouldn’t rush to judgment till they see the consultation report and what’s coming out of it.”

On the issue of undergrounding the grid: “This issue has been put very forcibly and EriGrid will have to respond to it. In whatever way they think is necessary to convince people that EirGrid is coming up with the best solution.

“Taking the chair of such an important company is a daunting prospect. However by virtue of my experience and the skills I have developed I hope I will guide the board to further success,” he noted.

“EirGird is of the first rank of importance in terms of semi-state bodies to the social and economic well-being of the whole island of Ireland. Its activities touch the lives of every person and business on the island,” he concluded.

EirGrid will be under the spotlight again tomorrow when the committee will address the concerns of regional communities in respect of EirGrid’s project to upgrade the electricity transmission network. Fintan Slye, chief executive of EirGrid, will be presenting to the committee on its plans.