In the limelight: Ground conditions ideal for liming 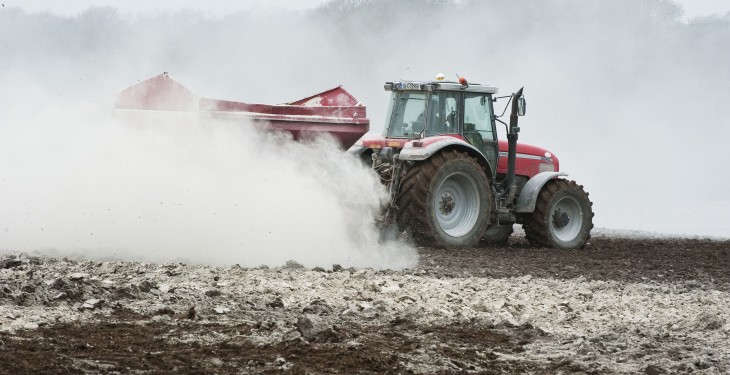 Farmers around the country are taking advantage of the unseasonably dry weather and getting lime spread.

Ground conditions across regions are ideal and with most of the country’s cattle and beef herds indoors, farmers are seizing on the opportunity to get this vital task done.

In 1995 and 1996, coinciding with the introduction of REPS, a million tonnes of lime a year was spread by Irish farmers. Since then the application of lime by farmers has fallen off significantly.

This is disappointing as soil pH has such a direct impact on the performance of crops be it grassland or cereals.

Teagasc points out the liming has several key benefits.

Not only does lime provide a valuable source of calcium, it also improves the availability of Nitrogen, Phosphorus, Potassium, Sulphur and Magnesium in soils.

Other benefits include encourages micro-organisms in the soil. It helps in the release of nitrogen from organic matter; increases earthworm activity, which improves soil structure and it assists the survival of clover bacteria.

Teagasc is advising farmers to set a target pH of 6.5. It says this is to allow for the gradual effect of liming and the gradual loss of lime after the target is reached for as long as possible.

It notes that on permanent pastures, if more than 10t/ha is required. Its advise is to apply 7.5t/ha immediately and the balance three to four years later.

Teagasc notes though this situation usually only arises in the absence of a liming programme, short-term leys should be limed to the required level of the most sensitive crop in the rotation.

Teagasc stresses that the best results are achieved by spreading lime at the time of reseeding when the lime can be worked well into the soil.

According to its advice, surface acidity (in the top five cm or two inches) often occurs in grassland due to our high rainfall and the use of nitrogenous fertilisers. This reduces the availability of fertiliser phosphorus.

For this reason, it says it is better to have frequent small applications of lime than one large application. Keeping the pH above 6.0 in grassland improves nitrogen recycling and reduces total nitrogen requirements.

Teagasc notes that there is no best time to lime, provided the lime is spread evenly and left near the surface of the soil. It says very acid land should be limed as soon as possible.

Teagasc also notes that lime needs to come into contact with every particle of the soil and therefore needs to be applied in good time. Where pasture fields are to be ploughed for tillage, they should be limed about one and a half years before ploughing.

According to Teagasc, lime should be applied two years in advance of lime demanding crops such as fodder beet, peas, beans, and also with wheat and barley.

It says where lime has not already been applied, it should be spread after ploughing so that it can react with the soil and can be thoroughly mixed with the soil during spring cultivation.

In the case of lime being spread to prevent club root, it says it should be spread at least twelve months before sowing the crop.

In addition, Teagasc says granulated lime (ground limestone with 100 per cent less than 0.1mm fineness in granular form) 125kg per ha may be considered equivalent to 370kg per ha of standard limestone.

It is now becoming more commonly used. Teagasc says it is very effective at increasing soil pH quickly but it is expensive and is most useful when the lime requirement is moderate. Because it can be applied by the normal fertiliser application equipment, it is normally used annually to maintain the desired soil pH.