‘Our objective is to keep the lights on’ – EirGrid CEO 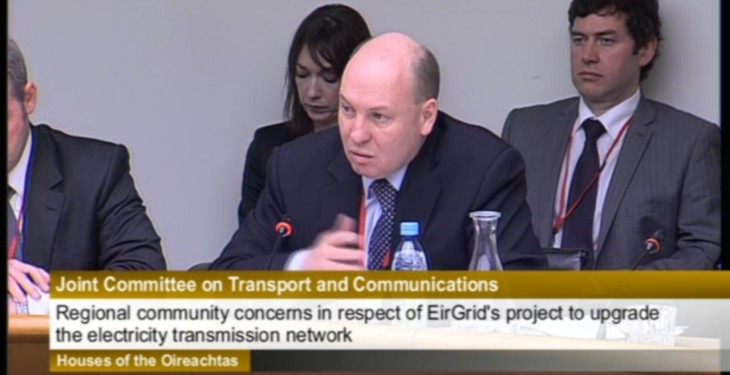 Under fire EirGrid was back in the Oireachtas again today this time represented by chief executive Fintan Slye.

According to the CEO: “Our objective is to keep the lights on, electricity is an essential part of a modern economy and a modern society.”

We look in the first instance at the extent to which we can upgrade the grid using the existing infrastructure. We look out into the future to ensure we have the grid necessary to ensure the lights stay on out in 10, 20, 30 years as well.

“But sometimes inevitably we need to build new infrastructure to cater for the needs of the future. We look at all the options available to do that. Be it over head or underground. We have no vested interested in a particular technology solution,” he stressed.

The said the Grid 25 strategy is investment in the transmission infrastructure and it’s essential to ensure balanced regional development. It is important the infrastructure is there to support industry and jobs, he said.

According to Slye: “ It is a €3.2bn investment over its term incorporating 200 projects right across the country. From the very small to the very large.”

Outlining the three 400KV lines that have grabbed the public’s attention the most, he said: “We realise  these projects are large in terms of scale and scope and we have set out for people how we were going to go about consulting and engaging with them.”

In terms of the North-South Interconnector, he said: “We have been developing that for a number of years. It is in the final stages of the planning application that hope to submit early in 2014.”

Regarding the Grid West project, the CEO explained: “It reinforces the grid in the West significantly. It is involved in harnessing the wind energy on the western sea board. We have identified a preferred corridor for that and we are out consult with people. We hope to submit a planning application at the end of 2015. So a long way to go.”

In terms of the Grid link, he said it launched in 2012. “It’s in a consultation period on the preferred corridors at the moment. At the request of this committee the consultation has been extended and will close on the 7 January next.”

On criticism of EirGrid’s consultation process, Slye stressed: “We will address all the issues that are raised. We will do it in a fair, balanced, open and transparent way.”

He continued: “We are very clear and upfront with people in regard to the process that would be involved in the development of these projects. The consultation has been above and beyond what has been put in place for other infrastructure projects to date be it roads or telecoms. Notwithstanding that we recognise there is a degree of concern out there about the information that’s available.”

He noted some of the concerns expressed: “There are a number of issues that we recognise that are coming up through the consultation, which are heath, undergrounding, visual impact, impact on property, community gin and the consultation process itself.”

On overhead versus undergrounding infrastructure, he said: “We have no vested interest in a particular technology solution. We look at all the available options to look at what is the best solution for the particular need on the grid and to meet the needs of Ireland Inc going forward.”

He continued: “Studies by both EirGrid and an independent government panel found it would increase the cost be a factor of three.”

As to whether he would live next to a pylon he said: “I would have no issue, I know it’s safe.”