Robots to Bring the Cows Home 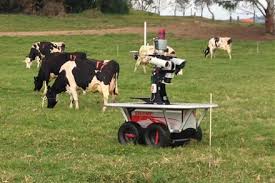 Farmers Down Under are trialling automated robots that could round up cattle, tend to plants and even take soil samples.

Originally developed by the defence and mining industries, it’s now being used for farming by The Australian Centre for Field Robotics at the University of Sydney.

The prototype is still in the testing stage and costs AUS$1m (€700k) but may be available for farmers in two years, possibly retailing at tens of thousands of euros.

Dairy researcher Dr Kendra Kerrisk told ABC News “Imagine this rather expensive dog is spot spraying weeds on the way out of the paddock, while he’s herding the cows. Maybe he takes a couple of soil moisture samples and tell the farmer it’s time to turn the irrigator on.

“We’re hoping that in time this very expensive dog might be able to head out in the morning and check the maternity cows to save the farmer getting out of bed.”