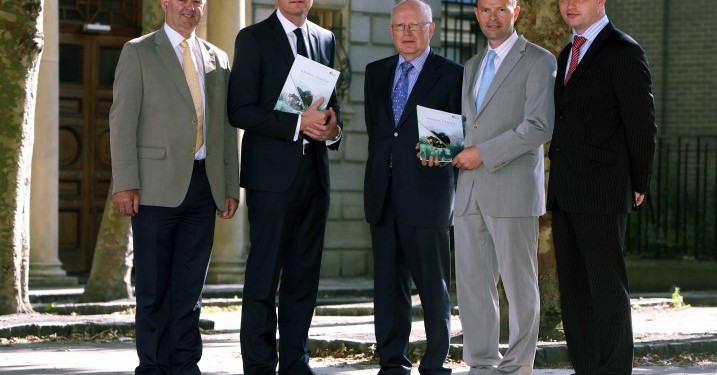 A major animal health think-in took place in Cork in October. The conference which was organised by Animal Health Ireland (AHI) was extremely successful and was very much enjoyed by all those in attendance including AgriLand.

The theme of the think in was ‘Animal Health: A Cornerstone of Sustainable and Profitable Farming’.

The issue of IBR was a hot topic at the event. David Graham, deputy ceo of Animal Health Ireland (AHI) and programme manager for biosecure diseases said: “The majority of dairy and suckler herds have evidence of IBR infection. There are similar levels between the two and the key challenge is herd-level prevention of the disease.”

Graham noted: “It is a complex diseases. Latency is its one trick to persist in the herd. All animals that have a primary infection subsequently develop a ‘latent’ or hidden infection. After recovery from the clinical signs, the virus is able to survive for the lifetime of the animal. The animal becomes a lifelong carrier.”

At the event Animal Health Ireland (AHI) chief executive Joe O’Flaherty told AgriLand that Ireland remains on course to eradicate BVD within the next five to six years.

He added that Johne’s and IBR are diseases that will come under increasing scrutiny by AHI, once resources become available.

O’Flaherty noted that: “We can eradicate BVD from the island of Ireland,” he further explained. “Our next objective will be to address the challenge of Johne’s. We already know that one in five local dairy herds are infected with the disease. The equivalent figure for beef herds is around seven per cent. Full eradication of Johne’s may not be a feasible option. However, we can commit to significantly reducing the level of the disease within breeding cattle herds.

“It is very much in our favour that the current level of Johne’s within Irish herds is significantly lower than that found in other countries.”

Johne’s disease was also on the agenda at the conference. According to Sam Strain, who is programme manager for Johne’s disease at Animal Health and Welfare Northern Ireland Johne’s disease is currently one of the major diseases on farms across the island of Ireland. “It currently affects 21 per cent of dairy herds in Ireland. With three per cent of cattle within these herds affected and the situation is much worse in Europe with infection rates as high as 50 per cent found.”

Interestingly he said: “Ireland has been sheltered historically, due to the fact we are an island and this has sheltered us from the disease,” Strain noted. “However this has certainly changed. In the post quota era it is likely there will be more movement of livestock between countries. The island of Ireland has no framework in place to deal with Johne’s diseases, which is in place in other countries; this could leave us at a competitive disadvantage.”

Mastitis was also discussed in depth at the conference: “Often the basic farm management practices don’t get much attention. We need to rejuvenate how the message is delivered to farmers in areas such as hygiene and teat inspection.” This is according to Finola McCoy of Animal Health Ireland and programme manager for CellCheck who spoke at the event.

She added that: “Farmers need to ask themselves: Is this an area I can do better on?” she stressed. Teagasc research has shown mastitis can result in significant losses on any farm and where prevalent, it can significantly reduce farm profits, McCoy added.

In an in-depth speech she outlined her work with CellCheck and future plans of the programme.