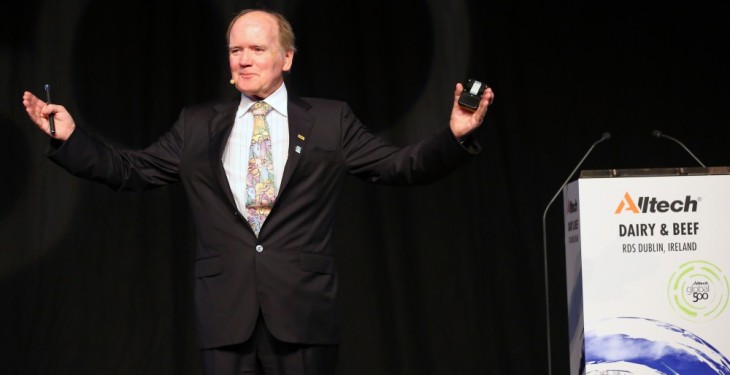 Alltech president Dr Pearse Lyons told AgriLand that Irish dairy and livestock farmers can look forward to a profitable future, given the growing demand for milk and beef in countries around the world.

Speaking on day one of the Alltech Global 500 event, which took place in the RDS earlier this year, he went on to point out that farmers must strive to improve the health, fertility and performance of their stock.

“This is the only way to make profits,” he stressed. “Yes, demand for food will grow over the coming years. And this will, no doubt, lead to improved farmgate prices. But farmers must take control of their own futures and that means striving to improve efficiency levels within their confines of their own businesses. “By acting on these objectives farmers will also find that the goal of lessening the carbon footprint of their businesses becomes attainable.”

Countless hot topics were discussed at the event. Dublin Rabobank’s Bill Cordingley stressed the need for the international dairy sector to copper fasten the integrity of its supply chain.

“Recent scares in China have served to significantly alarm consumers in that country,” he said. “The last thing international dairy companies need is a scenario within which young Chinese children and their parents start asking the question: is milk safe? Recent years have seen dairy imports into China increase by 60 per cent. And the opportunities for further growth in this regard remain more than significant.

With 81 per cent of meat protein consumption growth between 2010 and 2020 predicted to come from emerging markets, investor relations director, Jerry O’Callaghan of Brazilian Beef and Meat Company JBS outlined the potential for industry growth.

She added: “There is very little likelihood of Europe flooding international markets with dairy products post the ending of quotas in 20i5 However, we will see a tremendous polarisation within Europe in terms of where milk is produced, once production limitations have been removed.”

Another interesting topic at the conference was Glanbia’s strategy director Sean Molloy discussion on the Irish dairy industry. He said that milk output in Ireland will increase by at least 50 per cent between 2015 and 2020.

Speaking at the Alltech Global 500 event he confirmed that a survey of Glanbia’s 4,300 farmer supplier s pointed to the co-op’s milk pool growing by 56 per cent in the five years following the abolition of quotas. “This will be accounted for in terms of cow numbers expanding (39 per cent) and increased output per head (17 per cent).”

Delegates attending day two of the Alltech Global 500 event were told that calving maiden heifers at two years old, as opposed to 30 months, will save dairy farmers €1,500 per head, when one takes account of the additional rearing costs and loss in milk sales that are incurred.

Significantly, Gain Feeds and Alltech have joined forces to develop a heifer-rearing programme, which make the attainment of a twenty four month more than feasible for Irish farmers. The full details of the new initiative were discussed by Alltech’s John Lawlor, courtesy of his presentation to the conference.

Joep Driesen, from Holland, presented the concept of Cow Signals. This is an innovative approach to herd management, which is based on farmers and herd managers recognising the specific needs of their cows by ongoing visual assessment. “Cows are continually sending out signals about their health,” the Dutch veterinarian confirmed. “They are always trying to communicate with us and, in fact, are the best advisors on every dairy farm. The challenge facing milk producers is that of identifying these signals and interpreting what they mean.”

“The reality is that milk producers are now operating within the health sector. Yes farmers will be expected to produce more food, more sustainably and at a price which consumers can afford. But this is only scratching the surface in terms of what the milk sector can offer in the future,” he added.