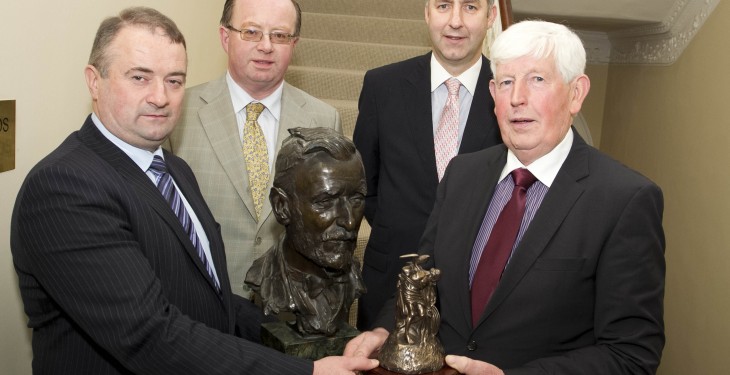 The lifelong personal contribution to the business of co-operation by Jim Maher has been recognised nationally by the Irish co-operative movement with its highest honour – the Plunkett Award for Co-operative Endeavour.

Maher is the former chairman of Centenary Thurles Co-operative, board member of Mid-Tipperary Co-operative Society Ltd and he is the founder of the highly successful Cooleeney Cheese business.

Maher received the award from the president of the Irish Co-operative Organisation Society (ICOS), Bertie O’Leary at a reception in The Plunkett House in Dublin. He was jointly nominated for the award by the Centenary Thurles and Mid-Tipperary Co-operatives.

A dairy farmer, Maher served as a Committee Member of Centenary Thurles Co-operative for over 30 years since first being elected at its antecedent Centenary Co-operative in1980.  In 1991, he was elected to the Board of Mid-Tipperary Co-operative Livestock Society.  He has served both co-operatives with distinction throughout his long career.

In 1996, he was elected to represent the then Centenary Co-op on the Council of Avonmore Co-operative from where he progressed in 1998 to the Boards of both Avonmore Waterford Co-op and Avonmore Waterford plc.  He played an active and supportive role in the consolidation and rationalisation of the business post merger, at a crucial time for what was later to become Glanbia.

In 2001, he was elected vice-chairman of Centenary and subsequently as chairman in 2002 where he continued to devote his energies to the growth and development of the society.  He played a crucial role in the process leading to the merger of Centenary with Thurles Co-operative to form Centenary Thurles Co-operative in 2005 and he was also subsequently unanimously re-elected as the Chairman of the new combined entity.

In addition to his far-sighted contribution to co-operative progress,  Maher is also a highly progressive dairy farmer and in 1986, together with his wife Breda, they started their own farmhouse cheese business Cooleeney Cheese.   They built a specialist dairy business which today exports cheeses to more than 15 countries, provides full-time employment to 12 people and buys high-quality milk sourced from locally producing farmers.

At Mid-Tipperary Co-operative Livestock Society, Maher’s contribution was equally impressive.  First elected to the Management Committee in 1991, he supported a strong period of growth and development for the Society including investment in the development of new facilities, new information technology and the overall successful promotion of the mart business.  He was also instrumental in the introduction of new Rules for the Society in 1995.

In the testimonials from both co-operatives, Centenary Thurles and Mid Tipperary, Maher’s exceptional voluntary contribution to the co-operative movement was highlighted and acknowledged, particularly for the positive long term economic impact it has had for farmer shareholders and for the wider rural community.

Speaking at the Award ceremony, Seamus O’Donohoe, CEO of the ICOS said: “Jim Maher’s exceptional personal contribution is recognised by this prestigious award named after Plunkett, the founder of the Irish co-operative movement.  He has given over 30 years of selfless voluntary commitment and service to the co-operative movement in which he also found time over 25 years to build a successful artisan cheese company, Cooleeney, whose brand is synonymous with quality and sustainability.  Throughout his time he has also made a significant and strategic contribution to structural change in the industry and to the widespread benefit of suppliers, shareholders and rural communities.  He is exemplary of the spirit that Ireland needs to create a better future and he is a worthy recipient of this prestigious award.”