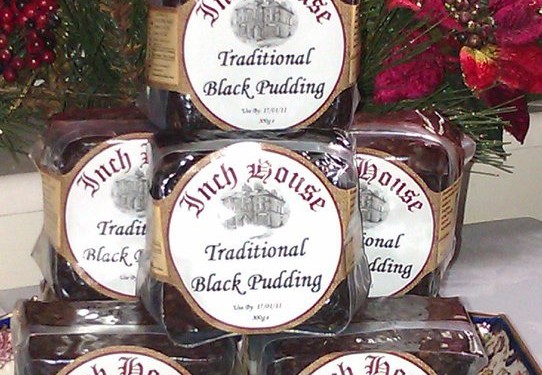 Inch House was rescued by John and Nora Egan in 1985 when the 18 Century Georgian mansion was in a state of dire disrepair. After lovingly restoring the property the couple, their family and a small team have worked hard to build a successful business.

The team at Inch House manage to combine farming, producing its own pudding range alongside a thriving guesthouse and restaurant business. In terms of farming John and Joe Egan till 350 acres of oats, wheat and barley each year and this is stored, dried and rolled onsite and then sold for feeding.

The head Chef John Barry raises the profile of the restaurant and also makes a range of chutneys, dressing and sauces. The five-bedroom guesthouse and restaurant are run by a small team including Máirin who has extensive experience in the hospitality industry.

In addition to the warm and welcoming hospitality Inch House is also renowned for its Traditional Black Pudding that is made by Máirin and her mother Nora. Sourcing quality ingredients for the products is key for Inch House.

“We get our fresh pigs blood from Crowe’s farm Dundrum Co Tipperary; they also supply us with the pork for our white pudding. We use Flahavans pinhead oatmeals and porridge in our puddings and Kelkin Gluten free porridge for our Gluten free black pudding,” detailed Máirin.

The story behind the black pudding reflects the family’s enthusiasm and interest in local and homemade produce.

“In early 2009 Nora was toying with ideas on how to diversify their food business further, and happened upon the idea of reviving a black pudding she remembered her mother producing in her youth. 94-year-old Mary Ryan gladly passed the recipe on to her daughter and indeed enthusiastically oversaw the early stages of production before satisfying herself the family secret was in good hands!

A highly successful launch of this uniquely flavoured, soft-textured pudding brought awards from as far afield as France. The range has now expanded to include no less than six varieties of both black and white puddings as well as a range of complimentary chutneys, dressings and sauces,” said Máirin.

The Traditional Black Pudding is sold in almost 20 Supervalu shops along with the Avoca stores and lots of other high-end food stores and butcher shops. Nora and Máirin also sell the renowned pudding at fairs and shows such as Bloom and the National Craft Fair.

Máirin believes that whilst selling is the primary focus of attending such events the connections made with customers and other suppliers are invaluable.

Along with hard work Inch House received some external support. The team linked up with Bord Bia for its MAPS programme, which supported the company’s marketing and brand development. The North Tipperary county enterprise board also assisted in the purchase of two new machines to help with the production facility for the pudding.

With the Traditional Black Pudding growing in sales, Márian notes the success of the house’s other operations. “The restaurant is holding its own and has been awarded restaurant of the month of November by Bord Bia’s ‘Just Ask’ campaign where we are praised for the use of local and Irish produce on our menu and for informing our customers of the same.”

The guesthouse won farmhouse of the year and with the great food, beautiful settings and cost-conscious rates the news is not surprising.

With so much on their plate I ask Máirin how the team manages to do it all: “We are most busy in the guesthouse and restaurant on Thursdays, Fridays and Saturdays. We then concentrate on food production On Sundays, Mondays and Tuesday. We might take one day off every week but saying that when you are self-employed your never really off.

Recipe for Sucess is a new series where AgriLand has linked up with Bord Bia to showcase an agri-food business every Friday.