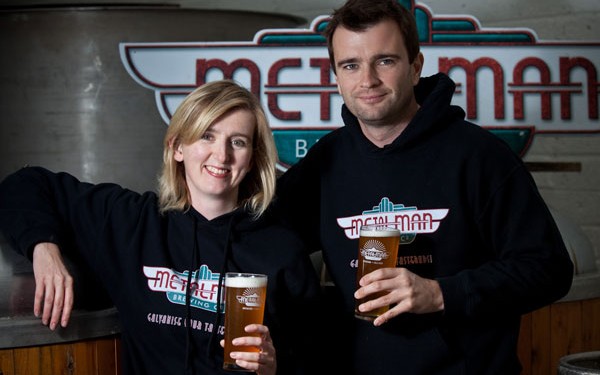 In a new series AgriLand has linked up with Bord Bia to showcase an agri-food business every Friday. This week AgriLand talks to Grainne Walsh of Metalman Brewing, one of Ireland’s few female brewers.

Based in Wateford Metalman Brewing was set up by Grainne Walsh and her partner Tim Barbar in 2011 who both came from a technology background but were drawn to something a little more exciting.

Walsh explained how they made the move from beer as a hobby to a booming business.

“We have long been fans of beer, and it has always featured in our travels together, we would visit breweries, brewpubs, try local beers and seek out interesting offerings. We were always as interested in the story behind the beer as the flavours themselves. We started looking more seriously at the beer option in 2009, researched the market and put together a business plan. In January 2011 I left my job to start Metalman Brewing.”

The first beer was launched in March 2011 and by 2012 the company set up a production facility in Waterford, partner Tim joined in April 2013 and now Metalman Brewing employs four people.

Currently 60 pubs carry Metalman products, the leading beer is Metalman Pale Ale, which won Beoir ‘Beer of the Year’ this year. The operation also makes a seasonal beer every few weeks for its customers that have rotating taps so that customers can get a flavour of different styles of beer.
Ireland has seen a growing interest in craft beers and Walsh feels that this along with a strong emotive connection to their products has helped the company’s success.

“People are seeking out value for money in these times and while craft beer is not a low-cost product, it is a product that is made locally, bringing employment to the area, bursting with flavour and with a very personal story behind it that lends itself to an enjoyable drinking experience.

“People can feel a connection to a product that will heighten their enjoyment of it. It’s just not something that can be had with a macro-produced beer, where the advertising is all about self-image of the drinker, rather than the qualities of the product itself. I’d like to think that Metalman Brewing offers a very reliable, satisfying beer experience for those looking for flavour and quality beer – not low cost, but good value.”
With tight budgets Metalman uses social media to promote its brand. In addition attending events is also something the company uses to spread the word.

“Bloom is a great festival for us, it brings lots of like-minded people together who may or may not be interested in craft beer already, but it gives us a chance to tell them who we are and what we’re doing, and hopefully send them away with a good impression of what is happening on the Irish craft beer scene at the moment,” explained Walsh.

One challenge Metalman has to overcome is the preconceived notion wine is for sophisticates while beer is for barbarians but this is something that Walshe feels is slowly changing.

The current brewery is operating at maximum capacity so 2014 will prove an exciting time for Metalman.

“We are looking at an interim expansion plan that will help get us over the peak periods of 2014, and in tandem with that, we’re looking at a new brewery and maybe relocation to larger premises, as we are pretty packed in where we are at the moment! This would then allow us to bottle our beer as well as look at export, in addition to extending our reach in the Irish market.”