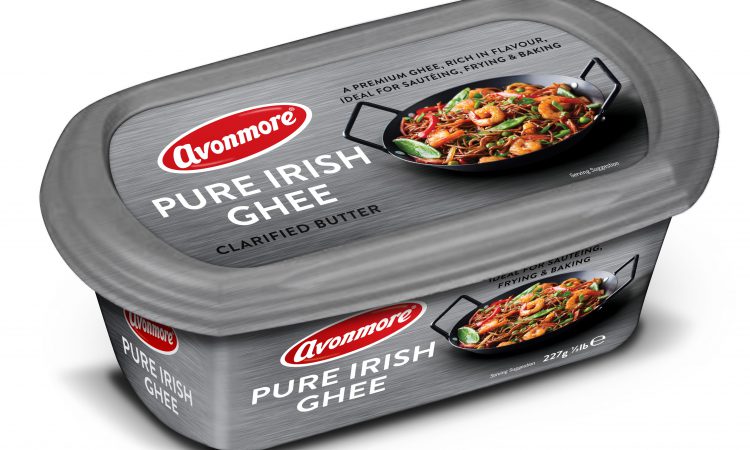 Avonmore is releasing the first clarified ghee butter onto the Irish market, Glanbia has announced.

Launched by the Irish food giant earlier this month, pure Irish Ghee is aimed at anyone with an interest in home-cooking – an interest which has seen a huge surge in popularity in kitchens across Ireland.

Ghee, which originated in India thousands of years ago, has become a “well-recognised superfood amongst health and flavour-conscious foodies”, it is claimed.

Glanbia says: “Clarified butter has become a firm favourite on the cooking scene for many reasons – largely down to how it’s made.

Ghee is made by gently heating butter made from cow’s milk until its water content evaporates and its milk solids can be skimmed and strained away. This clarification process gives ghee a higher smoke point since the milk solids are what cause dairy butter to burn, making it ideal for cooking at high temperatures and with full flavour.

This process also means that ghee is naturally lactose-free, while the removal of water and milk fats intensifies the flavour, the group says.

Ghee acts as a direct substitute for cooking oils and is perfect for everything from deep frying to toasting spices for a rich and full flavour.

Glanbia Ireland’s head product development chef Barry Foley said: “Unlike with oils, cooking with ghee is extremely versatile due to its higher smoking point, it does not burn like butter or get bitter like olive oil.

“It adds another depth of flavour because of its rich and slightly nutty flavour. Taste and flavour, not to mention a plethora of health benefits when compared to refined cooking oils, means that ghee is a kitchen essential for the modern cook.”

According to research by Bord Bia, seven out of 10 Irish people want to eat more healthily, and this number is rising every year as the healthy-living movement gains momentum across the board.

There has been a strong increase in home cooking or baking throughout 2020 with more consumers cooking their meals from scratch. Consequently, “there has never been a better time to introduce Avonmore pure ghee butter into their cooking repertoire”, Glanbia says.

In terms of ways to use Ghee butter, the trend of ‘bulletproof coffee’ sees fans of the superfood drop a dollop in their coffee for its inherent health benefits. It’s also consumed as a spread on toast or as a finishing touch on steamed veg.

For some culinary inspiration, Avonmore has compiled a collection of recipes using ghee butter.

Research has also shown that Irish people are now much more comfortable cooking with ‘healthy’ fats, with the avocado paving the way for good fats such as ghee, Glanbia concludes.