Despite this, the IFA says a very significant price gap developed this year between quotes to individuals and purchasing groups.

In its latest short term outlook for the sector the European Commission said EU prices for nitrogen fertiliser are mainly linked to natural gas (main production cost) rather than to oil prices.

This is clearly visible in the 2008 price spike, it said.

Furthermore, the different price developments for natural gas of Russian origin (supplying mainly the Centre-East Europe, and mainly indexed on oil price) compared to the one from the North Sea (supplying North-Western EU Member States).

The graph below shows also that the average price of Russian gas decreased only in the recent months (-20% in April 2015 compared to the previous month). 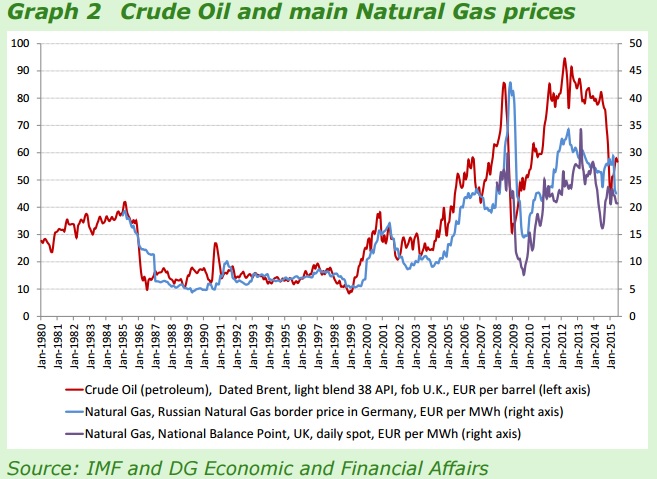 Prices of Russian natural gas remain however close to last year’s levels. On the other hand the price of gas from Norway and other North Sea suppliers in recent years showed a different development, almost completely disconnected from oil prices.

The Commission says because of partial substitution between energy sources, lower oil prices should ultimately lead to lower natural gas prices, even though past developments indicate that this may take time and can be partially transmitted.

It added that since natural gas is the main input to produce nitrogenous fertiliser in the EU, this should lead over time to lower production costs for the EU fertilizers industry and ultimately lower fertilisers prices.

Grass growth has picked up on the back of recent rains with the demand for fertiliser falling significantly as the season winds down, according the IFA.

It says a very significant price gap developed this year between quotes to individuals and purchasing groups.

Groups in many instances have been capable of obtaining keener quotes than individual merchants and co-ops, it says.

The IFA says purchasing groups and individual volume buyers have been quoted in the low €280’s for big bag CAN delivered farm and around €390/t for cut and pasture swards.

It says farmers should shop around before purchasing as many merchants will be looking to offload expensive stock as the season comes to a close.