AgriLand understands that a document is currently being drafted by representatives of the protesters in Dublin which is requesting that the Beef Market Taskforce be reconvened, and that outstanding injunctions be discussed at that first meeting.

According to one protester on the ground, they are seeking an answer to this request from Minister Michael Creed before December 15. If such a response is not received, the protester said: “We’ll be back here in huge numbers” on that date.

It remains to be seen if handing in this document would signal an end – at least for now – to the current protest, which has seen some 60 tractors park up around St. Stephen’s Green and the surrounding area, with significant traffic diversions in place.

The injunctions concern two farmers who were involved in a protest at C & D Foods in Co. Longford – a part of the wider protests that swept the country at the end of the summer.

The injunctions in question are being held against Paraic Brady – a Fine Gael councillor in Longford – and Colm Leonard. 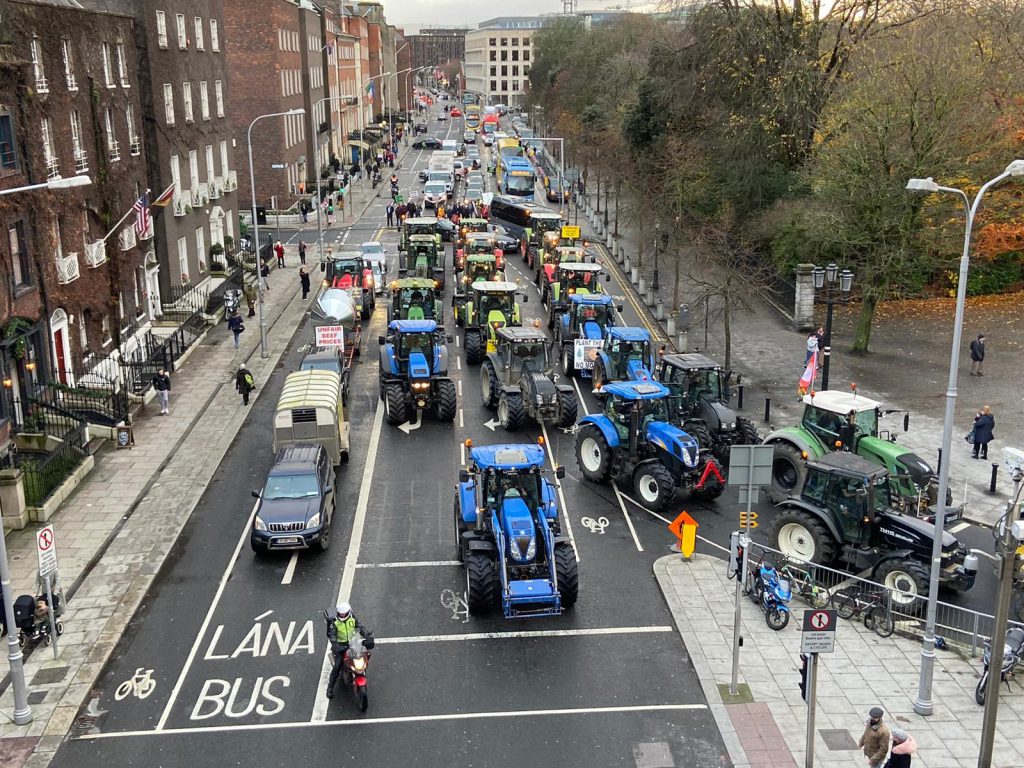 Brady met with Michael Creed, the Minister for Agriculture, Food and the Marine, this morning, Tuesday, November 26, to discuss the issue. The minister also also met with protesters at a Garda barricade across Kildare Street – the location of both Leinster House and the headquarters of Minister Creed’s department, Agriculture House.

Minister Creed came out to the barricade shortly after 7:00am this morning, and spoke with some of the protesters. However, some protesters have complained that, due to the hour of the morning, the representative group of protesters – understood to be comprised of five individuals – where not on the scene at the time.

A number of protesters were keen to stress that, despite the disruption to commuters and pedestrians, the reception from the majority of Dublin locals has been notably positive.

Protesters say they are receiving encouragement and sympathy from bystanders, with some apparently even stopping to inquire with protesters over the issues they are raising.

One protester commented: “We’re getting the message across”.

Minister Creed to take questions in Dáil this morning