Protest vox pop: ‘Great, in-spec beef produced by an industry with no future’ 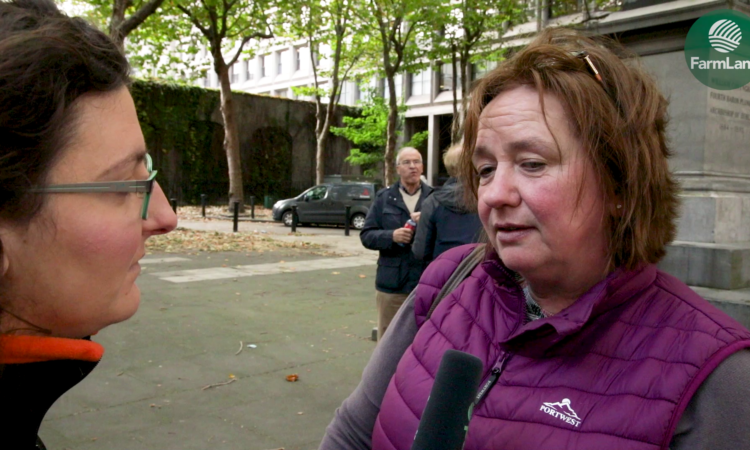 The severe lack of young people entering into beef farming is a sign of the struggle within the industry at farm level.

That’s just one message Farmland – AgriLand‘s new, cutting-edge digital broadcast show – picked up, as we spoke to a host of concerned farmers at the Irish Farmers’ Association (IFA) protest outside the 12th Beef Roundtable on Wednesday.

One of the protesters had left beef farming. At present, in his opinion, the sector holds no future.

I’ve left beef farming. I had the option, but most people don’t have that option.

“I’d ask processors, the industry and the Government: ‘If they can’t have an industry that attracts young people and new entrants into it, what future does that industry hold?’ It holds none,” he added.

This has been the toughest year I’ve ever seen on livestock farms.

“Farmers are constantly being told about this great product and this in-spec animal that they’re selling the whole time, and it’s just not delivering a margin for them.”

One Co. Laois man set out the issues quite simply. He could not understand how the main problems facing the sector were not being discussed at the forum.

“We’re here today because those issues are not on the table at the forum and we think they should be.

“If there is any forum where they are going to be addressed, it’s where you have the factories, the minister and ourselves sitting around the table. That’s where they need to be discussed.”

Another woman told AgriLand that it is now a “desperate situation”.

“As a suckler farmer, I see a very desperate situation. I see suckler farmers getting out of the industry all around the country.

The incomes on beef farms are very low and, for a young person coming in, it really doesn’t encourage anybody to give their time and their hard work if they’re getting no return from it.

“It’s very negative at the moment and it’s a very worrying time because we need the beef industry. It’s a very important part of our exports and of Irish agriculture.”