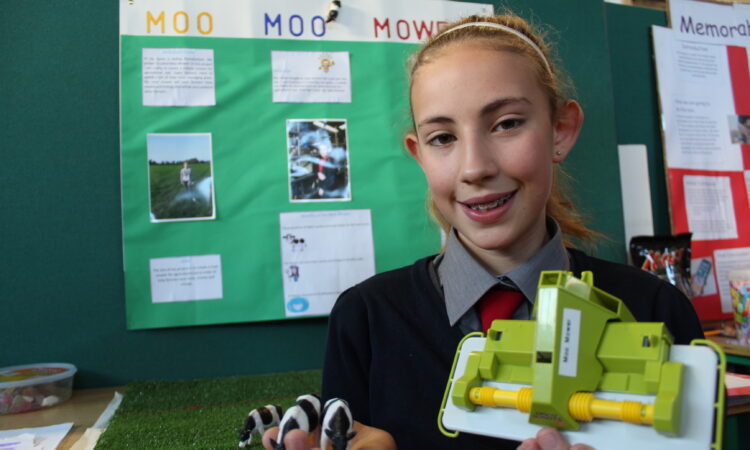 The level of agri innovation evident in schools around the country was commended by Intel mini scientist adjudicator, Ann Tilson, when she visited Timahoe National School, Co. Laois, last week. She was announcing the winner of the first area finals at an event in the school.

This augurs so well for the future as these children’s creativity and ingenuity can be built on for future studies and careers in the agri sector.

“I find it great that the competitors are aware of the issues that surround them in their environment and tackle problems in a mature and scientific manner. This makes the project relevant to their lives and not something abstract,” the judge said.

The Intel mini scientist competition sets out to give primary school students the opportunity to explore science through project-based learning and exhibitions.

Aisling Ramsbottom emerged as the first prize winner with her ‘Moo Moo Mower’ project. “My aim was to create a robotic mower for dairy farmers,” said Aisling, whose uncle, Tom Meade, is a dairy farmer.

“I came up with the idea because I know that dairy farmers are very particular about their grass and that it takes a lot of time and money to top the paddocks every week. Topping the grass to 5cm is the optimal length for grass growth and milk productivity, so I thought that a robotic mower would help to achieve this, saving farmers time and money,” she said.

My dad got an auto mower last year and I asked him if there was one available for agriculture. He said there wasn’t one on the market so I thought it would be good for farmers and the environment if one was developed.

“I wrote to Husqvarna suggesting the creation of an auto mower for agricultural use and the company said it was interested in the idea and would forward it to its R & D department,” Aisling said.

“I think the idea would be very beneficial for farmers and I would like to develop the idea in the years ahead,” said Aisling, whose project now goes forward to regional level. 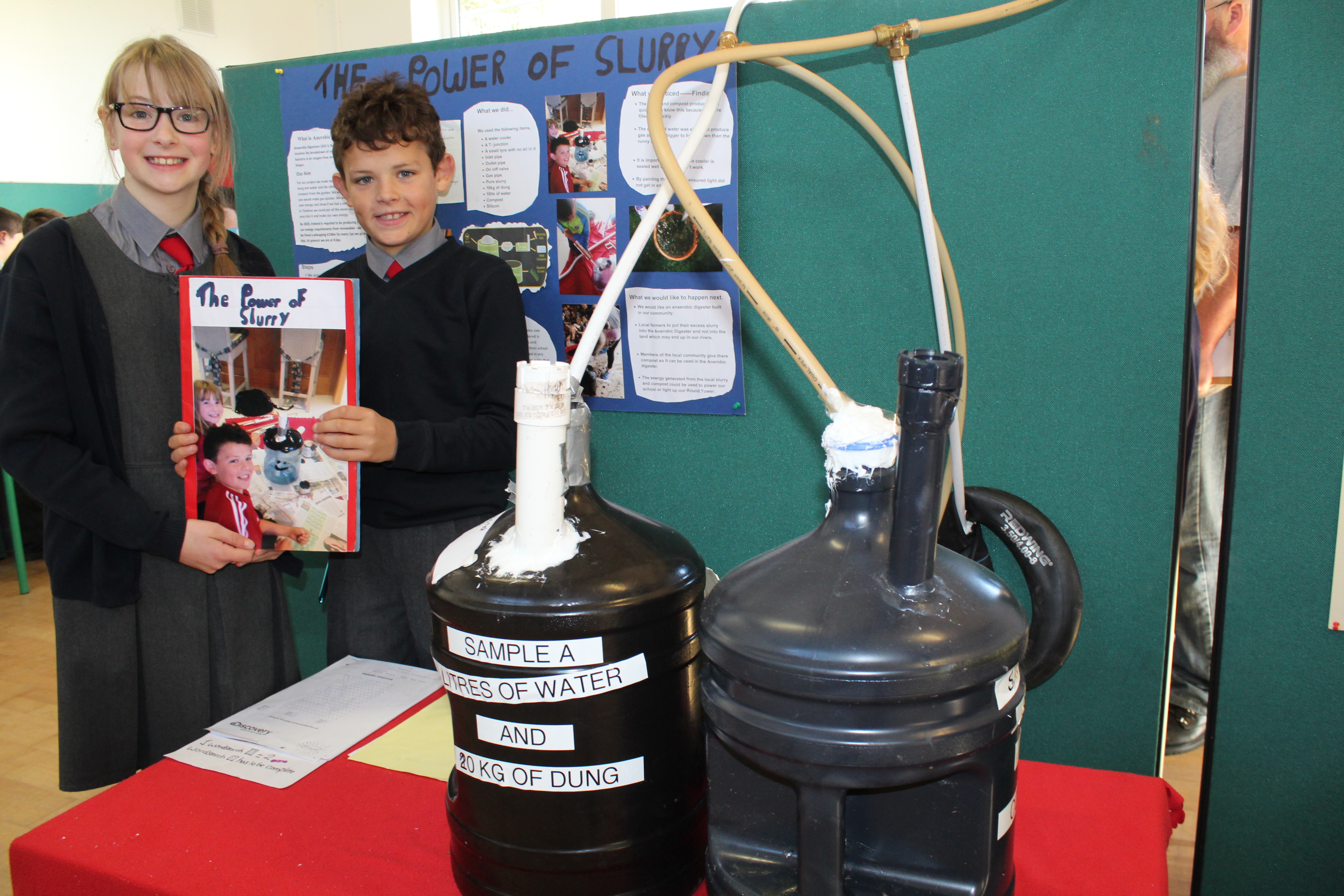 ‘The power of slurry’

Keeping agri innovation in the family was Aisling’s younger brother, Seamus, and their cousin Caoimhe Burke, who came in second place with ‘The power of slurry’.

Said Caoimhe: “We saw that farmers locally were repeatedly spreading slurry in the fields as they had more slurry than they required for their land. We thought that there must be a better way of using the excess slurry.”

The duo built an anaerobic digester to produce biogas from slurry which could be then be used as a power source.

“Our overall aim is to get an anaerobic digester with a CHP plant built in our local community where farmers could deposit their excess slurry. Compost could also be put into it. The gas produced could be then used as a source of power that could be used for our school.”

In an interesting addition to their project, they compared slurry and dung as a form of energy. “We compared the anaerobic efficiency of dung and slurry,” said Seamus. “We found that slurry is quicker to produce gas than dung.”

The cousins said they are looking forward to getting farmers’ feedback on their project, which they remarked was very enjoyable. 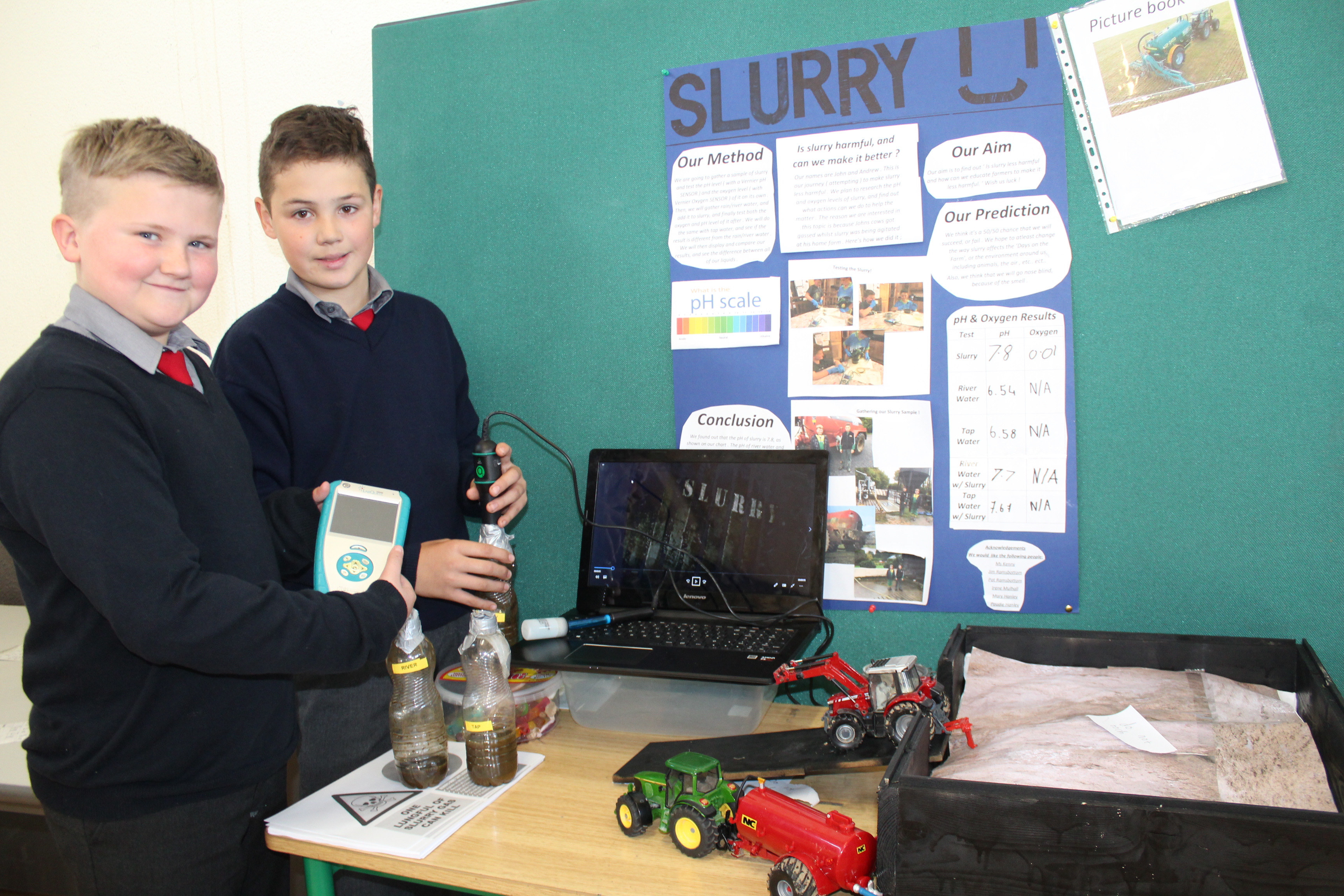 Andrew Coyne and John Hanley also chose slurry as their topic. “We studied the PH and oxygen levels of slurry, considering the dangers posed by slurry. We added water to slurry to see if it neutralised the hazardous effects,” said John.

“Our recommendation to farmers is to add river water to slurry before agitation to reduce the risk,” said the boys, who also produced a safety sheet for farmers. They received a certificate for scientific investigation. 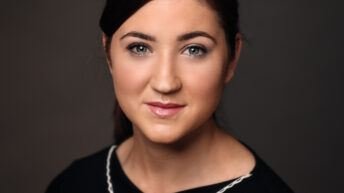