The price difference between Irish and UK R3 heifers has widened to 20c/kg in the space of two weeks, recent figures from Bord Bia show.

According to Bord Bia, Irish farmers were paid 388c/kg for R3 heifers during the week ending July 30, while beef finishers in the UK received 408c/kg.

According to the AHDB (the body for British beef and lamb), tighter cattle supplies combined with a weaker Sterling have combined to drive UK cattle prices up.

It says that the UK supply/demand balance is currently tipped in the producer’s favour and as a result prices have been creeping upwards in recent months.

And like the UK, the price difference between Irish and Northern Irish heifers has also fluctuated in recent weeks.

However, back on July 10, farmers in Northern Ireland were paid a much lower beef price than farmers in the Republic, as Northern Irish R3 heifers made 386.6c/kg, while heifers slaughtered down south made 398c/kg.

This means that Irish producers were paid 11.4c/kg more for heifers than their counterparts north of the border.

But, since then Irish heifer prices have dropped considerably, with most factories now offering a base price of 390c/kg for in-spec animals. 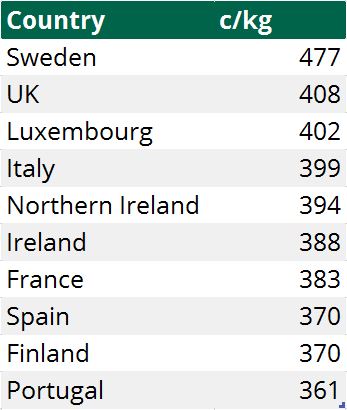 Beef prices on the continent

According to Bord Bia, Irish R3 heifers were the sixth most expensive in Europe during the week ending July 30.

Along with higher heifer prices in the UK and Northern Ireland, it shows that R3 heifers slaughtered in Sweden, Luxembourg and Sweden all made more than Irish heifers in the last week of July.

However, figures from Bord Bia also show that the Irish heifer price was considerably higher than the price paid to farmers in France (+5c/kg), Spain (+18c/kg) and Portugal (+27c/kg).