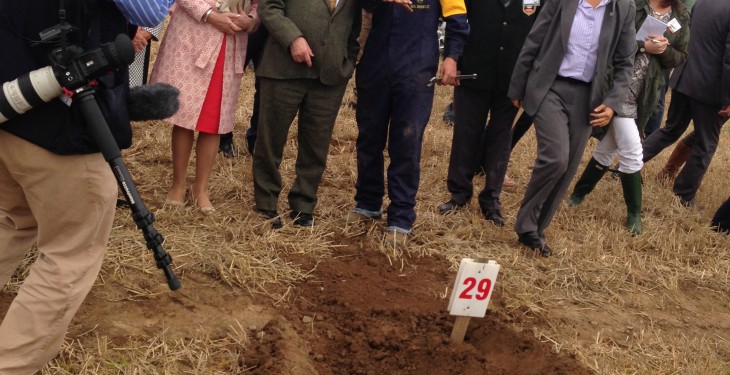 After a 70-year absence, the showcase event of the farming year is back at Ratheniska, Stradbally in Co Laois.

More than 1,400 exhibitors will have stands at the site and around 200,000 visitors are expected over the next three days. Prize money of €18,000 will be awarded during the championships, which are worth an estimated €40m to industry and the economy.

President Higgins officially opened the event where he paid tribute to Ireland’s farming and rural communities, and agri-food sector.

“Rural Ireland is part of our identity. It is part of what we are as a people. Farming, as both nourishing work and a nurturing way of life, connects us to one of the most fundamental of human activities.”

He also paid tribute to the organisers, the National Ploughing Association and the McHughs “whose enthusiasm and unfaltering professionalism allow Ireland to take renewed pleasure in the event”. He also thanked the landowners, the Carter Family, the Laois Ploughing Association, the 500 volunteers.

The president noted Irish farming has changed profoundly since 1943. “The crop areas under wheat have gone from 147,000 hectares in the late 1940s to 94,200 hectares in 2011, those under potatoes from 142,000 to 10,400 hectares, while the number of farms has decreased sharply over the same period. These figures reflect both the urbanisation of Irish society and the modernisation and greater productivity of our agriculture. But they also provide a powerful reminder of the challenges facing the Ireland’s agricultural sector. Enabling young farmers to access the land they need to make a living in agriculture is perhaps the greatest of all these challenges.”

“As we are facing into the next year with a renewed sense of optimism, I share the hope of everyone here that the sod we are turning over will deliver a bountiful harvest,” he concluded.