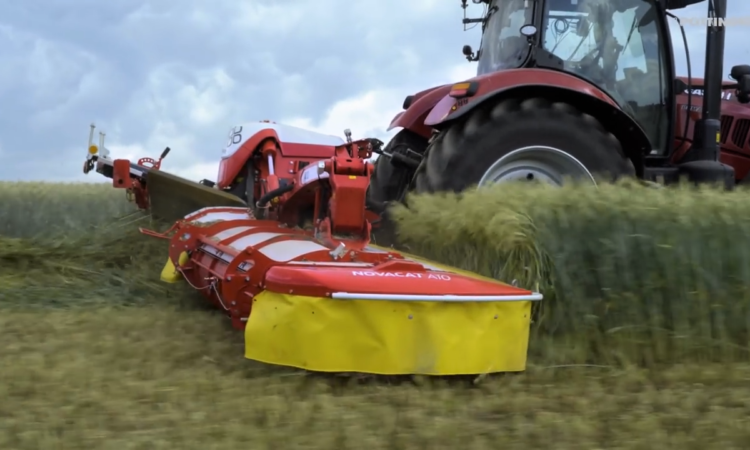 A Pottinger Novacat A10 Cross Flow in action

One of the latest developments from Pottinger enables swaths (windrows) from its mowers to be merged for the first time without a belt-type grouper.

The Cross Flow auger merges the swath immediately after mowing. The Novacat A10 and Novacat 352 mowers are available with this system.

A Pottinger Novacat A10 Cross Flow will make its Irish debut at the FTMTA Farm Machinery Show in Punchestown (near Naas, Co. Kildare) on February 7, 8 and 9.

Feedback from farmers formed the basis for this development, following calls for a cost-effective and straightforward system for swath merging (grouping) suited to simple rear-mounted mowers.

The Cross Flow auger system works without a conditioner; its key selling point (over belt/conveyor type groupers) is its light weight. A rear-mounted mower (a simple unit with no conditioner) with Cross Flow is a light machine.

This, says Pottinger Ireland’s Paul Wilson, means that the machine is suitable for smaller tractors. It also means that a much lighter footprint is left on the ground – a major concern for farmers wanting to protect their fields and their livelihoods.

This video (below) shows a Pottinger Novacat A10 Cross Flow in action.

Compared to belt/conveyor type groupers, the Cross Flow auger consumes 20% less power. And, because no conditioner is needed, the forage is handled with care.

This means that a Pottinger Novacat mower equipped with Cross Flow is equally at home handling grass or whole-crop silage.

If you combine the Novacat A10 Cross Flow with a 3m-wide front mower, you can mow 19m in two passes, with both swaths placed within a width of approximately 12m.

Or you can combine a Novacat 352 Cross Flow with a (3m) front-mounted mower to mow a width of 12m in two passes (with both swaths placed within a width of about 6m).